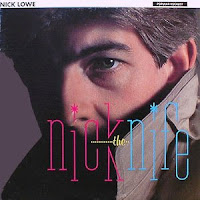 In February of 1982, the English singer-songwriter, musician and producer Nick Lowe released his third solo album, the first one since he and the band Rockpile split a year prior. Assisting on the album are former Rockpile bandmates Terry Williams (on drums) and Billy Bremner (on guitar) as well as English keyboardist and singer Paul Carrack.

Nick the Knife went to number 50 on the US Billboard Album chart and number 99 on the UK album charts.
Side one opens with the bouncing beat of “Burning”, the second single from the album. This song about unrelenting desire has a bit of country-twang to it.


Next up is a slowed-down version of “Heart”, a song that first appeared on Rockpile’s 1980 album Seconds of Pleasure. Aldo Bocca provides the percussion on this track, giving it a bit of a jazz sound. I like the keyboards on this one too; they create a very cool aura.

“Stick It Where the Sun Don’t Shine”, the first single, only managed to chart in Canada (where it reached number 35). The opening guitars and the vocals on this one remind me of early Beatles tunes. Lyrically, this is a big middle finger to a relationship that has gone completely sour. I’m sure that might have prevented it from getting airplay, but it really is a fun little song.

Keeping with the throwback stylings, “Queen of Sheba” has a late 50’s/early 60’s rock sound to it. I really like the Hammond organ on this track.

“My Heart Hurts” was the third and final single from the album. The up-beat tempo of the music contrasts the sadness of an aching heart.

The simple acoustic guitar accompaniment to Lowe’s vocals on the first verse of “Couldn’t Love You (Any More Than I Do)” is a perfect match. The rest of the band joins in then, adding more layers that I think aren’t as necessary. The track would have worked just as well, for me, without all of that. Keeping in simple would have been the way I might have gone.

Side two begins with “Let Me Kiss Ya”, a snappy little ditty. This one has so much bouncy energy that you cannot help but smile and get totally into it. I love the line “how I wish you would pucker for this sucker”; Lowe always turns a phrase in an interesting way.

“Too Many Teardrops” jumps back to the sadness theme (the songs seems to be going back and forth here like a Wimbledon tennis match). Still, Lowe makes each song stand out, with different musical hooks and a variety of ways of saying similar things. That’s the sign of a great songwriter.

“Ba Doom” again brings to mind some of the early days of rock and roll from the 50’s. The chorus/refrain, delivered in a deep baritone vocal, and the play-pause-play-pause rhythms set that tone perfectly.

“Raining Raining” is another song about having a broken heart. When the rest of the world is wonderful and sunny, the sadness and loneliness seem to pour down upon the loveless soul.

Next up is “One’s Too Many (And a Hundred Ain’t Enough)” with a Bohemian vibe to it. Again, I’m getting a Beatles vibe here too (clearly an inspiration to Lowe).

The record closes out with “Zulu Kiss”, with its varied tempos and a primitive, raw attitude.

Nick the Knife is a solid collection of tunes from an amazing singer-songwriter. Lowe really has a knack at crafting catchy pop-rock songs. This is one of those albums I really wish I would have picked up back in 1982; sadly it is currently out of print and not available from any of the usual download sources. CD copies from 1990 go for a hefty price tag; if you’ve still got a turntable you might be able to pick up a used copy on vinyl for a decent price. For me, I’ll just wait patiently and hope this one gets a re-issue just like Labour of Lust did a few years ago. When it does, you know I'll be jumping on this one fast.
Posted by Martin Maenza at 4:30 AM