Rick Astley - Hold Me In Your Arms 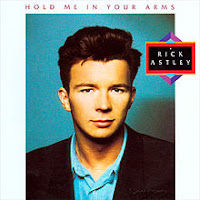 After his best-selling 1987 debut album Whenever You Need Somebody (click here for my review of that one), the English pop singer stuck with producers Stock, Aiken and Waterman for his second disk, the 1988 release Hold Me in Your Arms. The record reached number 8 in his native UK, number 19 on the US Billboard Hot 200, and number 3 in both Canada and Germany. It has reached Platinum sales in both the UK and Canada.


Side one starts with “She Wants to Dance with Me”, the first single from the album. The song hit number 1 in Canada; in the US and the UK it reached number 6 on the main singles charts. I recall this one being very popular at some of the dance places I frequented in early 1988 (places like “Bowties” at the North Raleigh Hilton and at “Cheers”, the ultimate club for weekends); as they say it has a nice beat and is easy to dance to. A solid way to open things up.

“Take Me to Your Heart”, the second single, reached number 8 in the UK and number 5 in Ireland. The song continues the up-beat, synth-pop tempo.

Three for three; “I Don’t Want to Lose Her” keeps up a very similar rhythm and tempo. This made it very easy for deejays to mix these songs together into mega-mix dance sets.

“Giving Up On Love” did okay on the US charts; it reached number 38 on the US Billboard Top 40 and number 11 on the US Adult Contemporary charts. This one changes up the beats a bit, adding a little more funk to it and harmonious backing vocals too.

This side closes with a cover of the 1966 Temptations hit “Ain’t Too Proud to Beg”. Sadly, the single did not have the same magic for Astley as it only reached number 16 on the US Adult Contemporary charts and barely cracked the Billboard Hot 100 (it only got as high as number 89). I like the more stripped down first verse musically which then builds in the chorus. And, of course, it has a smooth sax solo. This one shows off Astley’s blue-eyed-soul sound.

Side two opens with “Till Then (Time Stands Still)”. This one doesn’t stand still though as the bouncy rhythm is made for boogieing on the dance floor.

The opening of “Dial My Number” bounces from speaker to speaker (quite obvious with headphones on). This mid-tempo number is a reminder that loving is only a phone call away (because that’s how Rick rolls).

“I’ll Never Let You Down” stays with the mellow, mid-tempo Motown sound.

“I Don’t Want to Be Your Lover” is a strong statement about sexual fidelity with a sassy beat to boot.

The title track “Hold Me in Your Arms” closes things out with a gentle ballad. This third single went to number 10 in the UK and number 7 in Ireland.

Stock, Aiken and Waterman knew what made Rick Astley’s debut album successful - accessible pop-dance tunes and smooth, soulful ballads. They played it safe with Hold Me in Your Arms and stuck to that formula. For some, that would make this second record predictable and safe. For me, it is more of what I enjoyed from the first go-round. When this one came out in 1988 I was settling into my post-college life, holding down my first full-time job in my career. Having some stability was a good thing. And the music on this album were very stable and relaxing.
Posted by Martin Maenza at 4:30 AM

Email ThisBlogThis!Share to TwitterShare to FacebookShare to Pinterest
Labels: 80's, Hold Me In Your Arms, music, Rick Astley