The Beat / The English Beat - Wha'ppen? 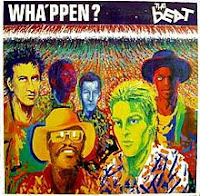 Following their debut album I Just Can’t Stop It (click here for my review of that one), the Beat put out their second studio album in June of 1981. Wha’ppen? went to number 3 in their native UK (just as the previous album did); in the US it spent six weeks on the Billboard Album chart and peaked at number 126.


Side one opens with “Doors of Your Heart”, the second single from the album. It reached number 33 on the UK charts. This song about falling in love has a great swing to it with an opening saxophone solo by Saxa. Ranking Roger gets some help on his rap with the harmonies of Cedric Myton, a Jamaican Reggae musician.

“All Out to Get You” was part of the double-A side first single, which reached number 22 on the UK charts. The song is about feeling uncomfortable in your own skin, nervous and anxious, and worried that the world is judging you at every turn. The music on this one has a similar edge with an uneven beat delivered by drummer Everett Morton.

I like the guitar on “Monkey Murders”; it has an exotic sound to it thanks to the Spanish guitar. Lyrically, it is about making tough decisions and weighing whether it is worth doing something that you know is very wrong.

“I Am Your Flag” is a strong political statement about the things people do and how they pay the ultimate price in the name of nationalism. The song has almost a classic rock and roll vibe to it.

“French Toast” is sung, of course, in French. However, the music is very festive and fun.

“Drowning” was the other half of the double-A side first single. Its slow methodic groove is like the rising water level slowly but inevitably becoming to unbearable for the subject person of the song. The man contemplates suicide to end his suffering.

Side two takes us to a “Dream Home in New Zealand”, a song that frames a conflict between the Americans and Russians as if it were a game show. And the big prize, of course, is a home down under. I love the opening which sounds a bit like a didgeridoo, very haunting.

“Walk Away” is like a voice in your head, screaming out the warning signs before falling into another bad relationship that will turn out the same way as previous ones.

David Steele‘s bass takes center stage on the next track “Over and Over”. There is also a nice steel drum rhythm on this one too.

Okay, I‘m struggling a bit to understand “Cheated”. I’m getting the impression of the news broadcasts that aren’t telling the whole truth, spinning the story.

“Get-a-Job” is a commentary on young people who are so unskilled and uneducated that they are forced to take factory work or other menial labor.

“The Limits We Set” is an up-tempo tune about shoplifting.

The 1999 CD re-release of the album, which sported a different cover, added one more track to the mix. “Too Nice To Talk To” was a single released in late 1980 that went to number 7 on the UK charts. While I enjoy this song, one of many from the band that I like, it does seem a bit out of place with the overall themes presented in the rest of the tracks from the original album.

I think Wha’ppen? kind of suffers from that sophomore stigma. Of the three studio albums by the Beat, this one is clearly lesser known and thus one that falls off most people’s music radars. I find that the band really was focusing on some mature, relevant issues that were going on around their native Britain at the time: violence, disenfranchised youth, media influences and the like. This is definitely not a party record; these are songs that make you pause and think a bit.
Posted by Martin Maenza at 4:30 AM

While I am not familiar with this album (yet!), I will add that when sitting outside on a warm sunny day, sometimes nothing is better than some English Beat or General Public.