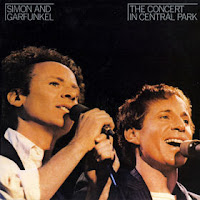 Today (February 16th) marks the 30th anniversary of the release of Paul Simon and Art Garfunkel’s 1982 live double-album The Concert In Central Park. The duo had gone their solo ways over a decade before but they reunited in September of 1981 for a free concert on the Great Lawn of Central Park in New York City. The show was attended by more the 500,000 people and was videotaped for an airing on HBO in 1982.


Side one opens with “Mrs. Robinson”, their 1968 number 1 hit. The live band delivers this one with a funky, railroad-train rhythm that gets the crowd on its feet right from the start.

From 1966, we next are “Homeward Bound”. I like how they start it out simple with just their two voices and one guitar, before the rest of the band joins in. This one always evokes memories of growing up in the 70’s in a small Northern town.

Next we get the journey song “America” which they recorded in 1968, noted for its non-rhyming lyrics.

The first of the solo songs comes up next with Simon‘s 1972 hit “Me and Julio Down by the Schoolyard”. I’ve always liked this song with its very catchy rhythms. The live version features a great saxophone solo by Gerry Niewood as part of the swinging horn accompaniment.

Simon and Garfunkel took the traditional English ballad as a foundation for their version of “Scarborough Fair” from 1966. This one spotlights the amazing harmonies the duo had.

Side two kicks off with “April Come She Will”, a lesser known track from their second album from 1966. It is a beautiful song, rendered here with a simple guitar accompaniment.

One of the best known versions of “Wake Up Little Susie” is by the Everly Brothers. The cover here by Simon and Garfunkel was released as a single in 1982 and reached number 27 on the US Billboard Hot 100. This is another one of those songs I’ve known all my life, very up-tempo and fun. I find myself singing right along with it no matter whose version it is.

Time for another Simon solo track, this time the title track “Still Crazy After All These Years” from his 1975 album.

“American Tune” is also a solo Simon track, this time from 1973. Here they turn this one into a duet with Garfunkel adding layers to the chorus.

“Late in the Evening”, from Simon’s 1980 solo album, was always a favorite of mine. I had the song on a 45. I just love the rhythms on this one and how the bass drives it all. How can you not listen to this song and not smile a bit?

Side three starts with “Slip Slidin’ Away”, a solo track from Simon’s 1977 greatest hits collection. Rob Mounsey’s synthesizer really adds to this live version a lot.

The key to a good live show is playing to the crowd, and “A Heart in New York” does just that here. This one is from Garfunkel’s most recent album at the time.

“Kodachrome/Maybellene” is a fun little medley. I like the rapid-fire guitars that are so prominent here.

Side four counts off with “Fifty Ways to Leave Your Lover”, a number 1 song for Simon in 1975. This is another fun song from growing up; we always tried to invent ways to add to the list.

“The Boxer” is another fitting song for this concert. The 1969 tune’s lyrics tell of growing up in poverty and loneliness in New York City. This live version includes the verse that was not present in its debut album version on Bridge Over Troubled Water.

“The 59th Street Bridge Song (Feelin’ Groovy)”, from their 1966 album, is also New York City-centric. The bridge name refers to the Queensboro Bridge in the city.

The concert closes with their big hit “The Sound of Silence”, a song written in the aftermath of the assassination of John F. Kennedy in 1963. This song always moves me, even though I was not even a glimmer in my parent’s eyes when JFK was killed or when this song was a hit. It is a timeless classic.

I can remember quite well the time in 1982 and watching The Concert in Central Park when it aired on HBO. It was a huge event, one of those Sunday night premieres. I always had a fascination for New York City, even though it wouldn’t be until 1986 that I would pay my first visit there. This concert and album were like magic to me, seeing the crowd of so many diverse people together in one place sharing in a musical event. And, it goes without saying; the music on this album is wonderful. So many of these songs were part of the soundtrack of growing up in the 1970’s; I have great memories of hearing them on the radio. Simon and Garfunkel show they are true musicians and are as amazing live as they are in the studio.
Posted by Martin Maenza at 4:30 AM

Simon and Garfunkel! They're one of my favorite singers. My siblings and me used to listen to them alot when we were kids, my favorite song was Homeward Bound. : )