Iron Maiden - The Number of the Beast 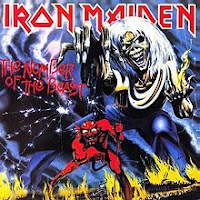 The English heavy metal band Iron Maiden got its start in 1975. The group was at the forefront of a British wave of metal in the early 80’s.

Their third studio release The Number of the Beast just celebrated its 30th anniversary on March 22nd. The 1982 album went Platinum in a number of countries and charted quite well (number 1 in the UK, number 11 in Canada, and number 33 on the US Billboard Hot 200). It also marked two turning points in the band: it was the final appearance of drummer Clive Burr with the band, and it was the debut of singer Bruce Dickinson.


Side one opens with the in-your-face “Invaders” thanks to the thundering drums and non-stop rapid-fire guitars. Combined, they create the perfect backdrop of this violent invasion of Nordic warriors.

I like the slower, melodic opening on “Children of the Damned” and how Dickinson stretches out the notes on the chorus. Of course, the song builds in power and attitude until it explodes in a final fury.

“The Prisoner” opens with spoken word as a man faces incarceration but refuses to be just a number. The track mirrors a kind of claustrophobic, nervous energy that would come from incarceration. I like the guitar solo on this one with its cascading notes.

“22 Acacia Avenue” continues the story of Charlotte the Harlot, an East End prostitute introduced on a previous Iron Maiden album. The singer here pleads for her to give up this occupation before her whole life has gone to waste.

Side two starts with the title track and second single from the album; it went to number 18 on the UK charts. “The Number of the Beast” sparked a lot of religious controversy in the US which was a bit unfounded. Despite that, the song ranked at number 7 on VH1’s list of the 40 Greatest Metal Songs. The lyrics tell of a hellish nightmare that haunts a lone young man.

“Run to the Hills”, the first single, went to number 7 in the UK and number 12 on the US Mainstream Rock charts. The song was ranked number 27 on VH1’s list of the 40 Greatest Metal Songs and number 14 on their list of Greatest Hard Rock Songs. The lyrics tell of how the white man came to America and took the land that belonged to the Native American Indians. The chorus is one that I recall quite well mostly because of the harmonies on the vocals.

“Gangland” is a hard-rocking look at street violence and living life on the edge. This one actually reminds me a bit of Van Halen on the musical side, which is a good thing.

The album closes with “Hallowed Be Thy Name”, the longest cut of the record (clocking in at seven minutes and twelve seconds). It opens with an ominous tolling bell that sets the mood nicely. The lyrics tell the tale of a man on death row who finds some final religious inspiration in his final moments. The track includes two guitar solos - the first by Dave Murray and the second by Adrian Smith.

I will admit that Iron Maiden was a little hardcore for me back in 1982. I was mostly listening to synth pop and new wave at the time. Still, I was familiar with The Number of the Beast as my best friend from high school owned the album. John would throw it on his turntable when we were hanging out at his house playing computer games.

Listening to these tracks again, after nearly three decades, I definitely pick out things I can appreciate on the album. The musical compositions, mostly written by bassist Steve Harris, are deftly executed. The lyrics aren’t nearly as ominous as I thought when I was a teen. And, of course, I always felt the painted cover art by Derek Riggs was pretty cool looking.
Posted by Martin Maenza at 4:30 AM

This was one of those albums that led me on my "road to ruin". lol As a comic book fan and kid, Iron Maiden and Judas Priest's album covers sucked me in as a 10 year old.
30 years later, this album still holds up. I dislike how they have had recolored album cover art on all pressings since 1998, but I still have the original.

Seriously great review! This is a powerhouse all these years later. Maiden continue to live in my top five of all time list.

Up the Irons, my friend. Nice work.

Kris, agreed - those covers appeal to the comic book fan in me too.

Fister, thank you so much for your comments too.

I appreciate you both taking the time to read my thoughts.

A great review of a great album.

I agree one hundred percent about the song Number of the Beast.

If people listened to the lyrics it isn't as devil inspired as you think.

Nice to see some more Maiden fans out there.