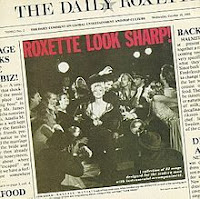 Today’s album review was a request by one of my Twitter followers. Mel from Australia wanted to know if I was going to do a Roxette album, so this one is dedicated to her.

In 1988, the Swedish pop and rock duo Roxette (Marie Fredriksson and Per Gessle) released their second studio album. Look Sharp! was the record that propelled them into the International charts and is considered their breakthrough record. The album went to number 1 in Sweden and Norway, number 2 in Australia, number 4 in Switzerland and the UK, number 7 in Germany, number 8 in Canada and number 23 on the US Billboard 200 chart. It has sold over nine million copies worldwide.


The original vinyl release had twelve tracks. The CD release included the song “(I Could Never) Give You Up” which was released as a B-side to their third single. We will look at the rest of the album in order of the vinyl release.

Side one begins with “The Look”, the first single from the album and the band’s first song to go to number 1 on numerous charts (Australia, Germany, Switzerland, Norway, Canada). In the US, it went to number 1 after snuffing the Bangles’ “Eternal Flame”; it was driven out of that spot after a week by the Fine Young Cannibals with “She Drives Me Crazy”. This is my favorite track from the album; I remember fondly in my final night club year dancing to this one. It has a solid beat with amazing guitar hooks.

“Dressed for Success”, the second single, went to number 14 on the US Billboard Hot 100 and number 18 in the UK. In interviews, Marie revealed that she was very angry at the time they recorded the song after having an argument with Gessle. After the one take, they agreed that it really worked for the track and kept it as is. This one also has a decent beat to it.

I like the keyboards and electric guitars on “Paint”; they combine for an up-beat tempo.

The rhythms continue with “Dance Away”, another track full of energy and attitude.

“Cry” closes out the strong first side with an emotional ballad about a relationship that has come to an end. I like the cascading sounds that echo from one speaker to the other.

Side two starts off with “Chances”, a single that was only released in a few countries in Europe. The music video, however, got much play around the world and on MTV. The racing rhythms and stalking synths bring to mind an episode of Miami Vice or other glossy 80’s police dramas.

“Dangerous” was the final single from the album; it went to number 6 in the UK and number 2 in both Canada and the US (Paula Abdul‘s “Opposites Attract“ kept it from number 1 on the US Billboard charts). This dance-rocker was another popular one in the clubs as the decade was coming to an end.

“Half a Woman, Half a Shadow” is next. It is another song about a broken relationship where the woman is left feeling very empty and lackluster.

“View From a Hill” is another very danceable track.

“Shadow of a Doubt” has a bit of an ominous tone to it thanks to the keyboards.

The final track “Listen to Your Heart” was also the third single. It went to number 6 in the UK, and number 1 in Canada and the US (on the later charts it dethroned Janet Jackson’s “Miss You Much” and then was unseated by Bad English’s “When I See You Smile”). This power ballad was inspired by a friend of Gessle’s who was going through a difficult divorce. I think it is an amazing way to close out the album with a very strong song; this is my second favorite track on the album and a slow dance main-staple in 1989.

Look Sharp! hit the stores at the end of my first year out of college. As I mentioned, the bigger of Roxette's hits were favorites in the bars and dance clubs around Raleigh as well as on the radio stations. I enjoy this record; the music is very up-beat and danceable.
Posted by Martin Maenza at 5:23 AM

Look Sharp was released Oct 19th 1988. did you know that or was it just coincidence?

I'd like to say I planned it that way, but this was a total coincidence! This review was originally slated for two days prior but I shifted some things. How cool is that?