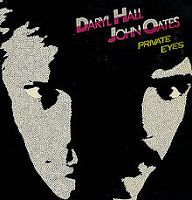 After starting out the decade with Voices (click here for that review), Daryl Hall and John Oates kept the momentum going with their tenth studio album from September 1st, 1981, Private Eyes. Like the previous album, it also reached Platinum status; it went to number 5 on the US Billboard Album chart and number 8 in the UK. It also generated four Top 40 hit singles. The record effortlessly combined pop, rock, R&B and soul genres into one of the decade’s notable releases.


Side one opens with “Private Eyes”, the title track and first single. The song went to number 32 in the UK and scored a number 1 on the US Billboard Hot 100 charts (it spent two weeks there after knocking out Christopher Cross’ “Arthur’s Theme (Best That You Can Do)” and then being ousted by Olivia Newton-John’s “Physical“). The piano-driven melody sets the stage for this hit about how in a relationship every move is taken in by the other.

“Looking for a Good Sign” has a prominent drum beat to it. The vocals and lyrics though have a bit of a throwback to the Motown music days of the late 60’s and early 70’s. This one sounds like something the Temptations might have recorded.

“I Can’t Go for That (No Can Do)” was the second single from the album; it too went to number 1 on the Billboard Hot 100 after breaking Olivia’s ten week dominance with “Physical”. The title comes from a phrase the guys would bandy around when they found themselves pressured into a situation to go along with the crowd. The lyrics recommend that people think for themselves rather than go along with others just because they feel obligated to. I really like the synthesizer hooks on this one a lot.

“Mano a Mano” takes off the gloves and goes for a bit more of a rocking edge. John Hall takes over the lead vocals on this track. The hand-claps carry the chorus.

The third single “Did It in a Minute” spent eleven weeks in the Billboard Top 40 and peaked at number 9. The song has an effective blend of keyboards and guitars. The chorus includes sharply punctuated words, giving them each more emphasis, as well of effective repetition of phrases.

Side two starts with “Head Above Water”, an up-tempo tune that draws comparisons between being in a relationship and trying to survive on a sinking ship. Clearly they had some real life situations in mind when they co-wrote this one with Sara Allen. The musical composition on this track, like much of the album, is very tight and concise. The guys were clearly in a creative groove as they crafted these near perfect pop songs.

“Tell Me What You Want” opens with what sounds like something played on an old radio. It then explodes into a syncopated jam with an interesting off-beat rhythm. The various elements actually come together pretty good on this deep track.

A more often used subject of an answering machine is part of “Friday Let Me Down”. I can remember that those were a new gadget that were making their way into people’s lives back in the early 80’s, thus they were something fascinating rather than common place like nowadays. The track is pleasant but not incredibly memorable. I would put it in the filler category.

“Unguarded Minute” is the second longest track on the record, clocking in at just over four minutes. Hall and Oates definitely optimized each track on this record by keeping them between three and half and four minutes, setting them up to get in to do their job and get out. The tempo is also the slowest of the songs but just barely. It has hints of their previous hit “Kiss On My List” as part of its melody.

“Your Imagination”, the fourth and final single, only reached number 33 on the Billboard charts. The chorus is sort of catchy but the verses don’t tend to stick with me for very long. The synth hooks are kind of quirky though.

The final track “Some Men” is the longest at four and a quarter minutes. This one has a lighter sound to the verses than the previous songs.

I was in my sophomore year of high school when Private Eyes was released. I had both the huge hits on 45s; it would be a number of years later before I could come to enjoy and appreciate the deeper tracks from the album though. Clearly, Hall and Oates had found their place for the new decade and worked that formula like a well-oiled machine. There is a reason they were the biggest selling duo of the 80’s - their music was consistently good.
Posted by Martin Maenza at 5:23 AM