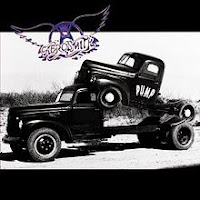 In the late 1980’s, Aerosmith was going through a second career boom. After working with Run-D.M.C. on their hit cover of “Walk This Way”, the Boston rock band was now getting exposed to a whole new generation of fans. In 1989, they released Pump, their tenth studio album, to acclaim from fans and critics. The album was certified multi-Platinum and peaked at number 5 on the US Billboard 200 album charts.


“Young Lust” opens side one with the driving beat of Joey Kramer on drums and the rapid fire guitars of Joe Perry, Brad Whitford and Tom Hamilton. Steven Tyler does double duty on both vocals and harmonica. It really starts the record off on a high energy note.

“F.I.N.E.” continues the theme by focusing on young hormones gone wild. There are plenty of sexual innuendos through out this rocker.

Catherine Epps provides the spoke word of the elevator operator before the next track. “Love in an Elevator”, the first single from the album, was also the band’s first #1 hit on the US Mainstream Rock charts; it also went to number 5 on the US Billboard Hot 100 chart. The song is a straight-forward celebration of the fantasy of having sex in a public place. This was a popular one at some of the bars we frequented, a nice rocker to get folks out on the dance floor.

“Monkey on My Back” is an autobiographical song that addresses how the members of the band overcame drug abuse and addiction. I like how the rhythm changes up after the thirty second opening.

The album‘s second single was “Janie’s Got a Gun” which went to number 4 on the Hot 100. It also won the band its first Grammy Award for Best Rock Performance by a Duo or Group. The lyrics of the song are rather serious in nature as a girl takes revenge on her father who sexually abused her; the music has an equally ominous, heavy tone to it - especially the opening. It has so many layers and textures, making it an amazing track.

Side two starts with the “Dulcimer Stomp”, which features Randy Raine-Reusch on an Appalachian dulcimer. It is a definite change of pace from the band’s normal rocking. This leads appropriately into “The Other Side”, the fourth and final single. Though it only reached number 22 on the Hot 100, it too went to number 1 on the Mainstream Rock chart. I enjoy Tyler’s keyboards on this one.

“My Girl” has another stomping drumbeat to it as Tyler sings an ode to a spitfire gal. The song harkens back to the band’s blues influences from their early albums in the 1970’s.

“Don’t Get Mad, Get Even” features Raine-Reusch on a didgeridoo, an Australian wind instrument. It gives the song a nice twist to the classic blues riffs used in this one.

After another short interlude called “Hoodoo“, we wind into “Voodoo Medicine Man”. Whitford’s rhythm guitar is wonderful here. The tempo is a welcome change up too.

“What It Takes” was the third single; it went to number 9 on the Hot 100 and number 1 on the Mainstream Rock charts. This ballad is pretty straight-forward and a good way to close out the record. I like how the lyrics tie back to the second track (“…before I met you I was F.I.N.E. fine…”).

The album closes then with an untitled instrumental piece, just a minute or so long, at the end of the tenth track. It reminds me of the mountains of North Carolina or Tennessee.

When Pump was released in the fall of 1989, I was out of college and working my first full-time job. I was also dating the woman who would soon become my fiancée and wife. I remember that these tracks could be heard all over the radio, on both the pop stations and the album-oriented rock channels. MTV showed the videos quite a bit too. There was no getting away from Aerosmith and Pump; it was some great rock and roll to close out the 80's decade in a hard rocking way.
Posted by Martin Maenza at 5:29 AM