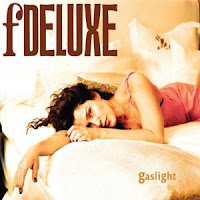 A couple weeks back I was reviewing the Family’s 1985 self-titled debut album (click here for that review) and I mentioned that I really wished they had put together more than one record. This year, my prayers were answered when last month (September 2011), four of the five original members put out a new release called Gaslight under the new band name fDeluxe. It has been twenty-six years but this was well worth the wait.


The record starts out with “Drummers & Healers” a very funky jam that would sound great blasting from the speakers in a crowded dance club. It has an old school 70’s feel to it like Parliament Funkadelic with Eric Leeds’ cool saxophone thrown in for good measure.

Susannah Melvoin takes the initial lead on vocals for “Over the Canyon”, and then St. Paul comes in for lead on verse two. The two have wonderful chemistry together. Perfect pop harmonies.

The title track is next. “Gaslight” allows Susannah’s sultry side to slide on through. It works perfectly with the jazz-funk fusion by the guys.

The orchestration on “Beautiful You” creates a lush landscape to layout out this declaration of love. It takes me away to a warm, sunny meadow full of flowers and blue skies, where the only thing that matters is that significant other.

“@8” is a lavish night on the town where the sky is the limit and everything is taken into account to create that perfect date. The song is sexy, seductive and swinging.

The band takes the tempo down with a slow, steamy ballad “The Vigil”. St. Paul and Susannah make me feel those emotional depths of longing.

“Leeds Line” is a tight jazz instrumental. Something about the saxophone I find totally entrancing and irresistible.

“Lover” sounds like it would have been right at home on that first album back in 1985. It marrys all of the contributions of the four musicians into a beautiful package. The song’s power comes from its controlled approach.

“When You Go” is gentle like a spring shower, washing over the body and soothing the soul.

Jellybean Johnson lays down the foundation of “Sanctified” with his crisp percussion over which the rest of the band can do a soulful strut.

“Last House on the Block” closes the record with a sweeping instrumental filled with strings.

While the Family album may have been a creation by Prince, it was always clear to me that he was working with a talented group of individuals on that project. That album would not have worked otherwise.

Gaslight shows that these four have a magical spark when they come together, creating something even larger than the sum of their amazing parts. This album is not of a band out to recapture their glory days; this album is a band announcing a new era that builds upon what came before. fDeluxe has a long, promising future ahead of them, and I plan to be along for every step of the way.

The band’s website is: http://www.fdeluxe.com/
Posted by Martin Maenza at 6:00 AM