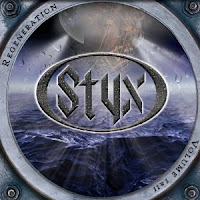 The dictionary defines “regeneration” in a couple ways: the act or state of being renewed or restored; a spiritual rebirth or religious revival; the re-growth of lost parts or organs; a feedback process in which energy from the output of an amplifier is fed back to the grid circuit to reinforce the input.

Some would argue that the best days of Styx ran from the early 1970’s through their mega-hit 1983 album Kilroy Was Here. After that the band put out a few albums of new materially sporadically (in 1990, 1999, 2003 and 2005) along with a whole slew of live concert and compilations of classic tracks.


The band, however, has far from called it quits. Yes, the line-up has shifted some over the years (most noticeably with the departure of Dennis DeYoung) but Styx continues to tour and perform to eager audiences. In a lot of ways, they have been in a state of regeneration for the last couple of decades.

In 2010, the current line-up of Styx (Tommy Shaw, James Young, Lawrence Gowan, Ricky Phillips and Todd Sucherman) put out a seven song EP that was sold at concerts and on the band’s website. In October of 2011, they added a second disk with nine additional songs to create Regeneration: volumes 1 and 2 which is available in many retail outlets.

Disk one offers new recordings of such classic tracks as “The Grand Illusion”, “Fooling Yourself (The Angry Young Man)”, “Lorelei”, “Sing For the Day”, “Crystal Ball” and “Come Sail Away”. It also features a new track called “Difference In the World”, a song about growing up and making something of one‘s life; I like that it has an old-school sound to it.

Disk two includes these Styx tunes: “Blue Collar Man (Long Nights)”, “Miss America”, “Renegade”, “Queen of Spades”, “Boat On the River”, “Too Much Time On My Hands” and “Snowblind”. It also features two Damn Yankees’ tunes - “Coming of Age” and “High Enough“; Tommy Shaw spent some time in the 90‘s with that super-group along with Jack Blades, Michael Cartellone and Ted Nugent.

I had the opportunity to listen to this new collection of tracks this past weekend. Going into it, I knew this wasn’t going to be an exact recreation of those classic rock songs I have heard countless times over on album-oriented rock stations since the days of my youth in the 70‘s. And I wasn’t expecting that either. This is a group of musicians that have evolved over the last three decades. Each brings something to the table when it comes to playing these songs.

The arrangements are strong and the music sounds tight. The songs have a more focused view, less cosmic and trippy and more grounded and mature. The vocals are different from the originals but still very good. I am glad they stuck to the more traditional route rather than doing complete re-interpretations of the songs in newer or different styles. Many of these songs are rock mainstays for a reason. I feel that Styx is definitely a band that can still perform their catalog with their heads held high.
Posted by Martin Maenza at 5:32 AM

I find this review from Jeb Wright a little more in line with my thoughts. Really were these albums worth it? To me these albums lack the everything the originals had in them. I saw someone else posted on another forum, that these songs had no heart and no love. I aggree with that poster.

Many rock fans do not realize that many of their favorite bands do not own the rights to their own material. With classic rock tunes being favorites of advertisers, and advertisers willingness to pay big bucks to use these tunes in commercials, many bands redo their own songs in order to have something that they own to sell for these commercials. They also are handy to force the hardcore fan base completists to shell out a few more bucks for new product – err, sorta new product – to add to their collection.

Whether this was the reason Styx released a two-disc set of their own tunes or not, only the band and their management knows.

It’s a shame this type of thing has to go on, as it really makes bands like Styx look as if they are out of original ideas. The fact that this ‘Styx’ album also contains two Damn Yankees songs on it only adds to the confusion.

The only interesting things about this album are the songs that Lawrence Gowan sings. Gowan replaced Dennis DeYoung and hearing his take on classics Styx tunes, including “The Grand Illusion” and “Come Sail Away,” is something different. However, he can be heard singing these songs on any of the live CDs or DVDs that have been released since he has been in the band.


This is a throwaway album that really is not that impressive. There is a new song titled “Difference in the World” but, at the end of the day, it does more to make one wonder if the band really is out of good ideas, as it is a forgettable song.

Perhaps the time has come for Styx to take a few years off the road and recharge their batteries. Can anyone say, “Damn Yankees reunion?”

As I noted in my review, the songs don't sound the same but they don't sound bad either. With over three decades in the business, Styx still can play these songs fairly well.

I have no interest in speculating on the band's or their management's motivation for releasing the re-recordings as Jeb Wright has done.

My advice to anyone is that if the review intrigued you then give the music a listen for yourself. Only you can judge whether you like it or not.

That's the beautiful thing about music - different people can see different things in the same recordings.