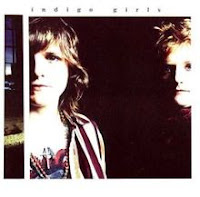 Today is my wife’s birthday. In honor of the occasion, I thought I would review an album by one of her very favorite groups, the Indigo Girls.

In 1989, the Atlanta based folk-rock singers released their second studio album, the self-titled Indigo Girls. The album did very well, reaching number 22 on the US Billboard 200 album charts. It also went gold within six months of its release and eventually achieved platinum sales status. Thanks to this album they were nominated for the Best New Artist Grammy and Best Contemporary Folk Recording; they won the later but lost the former to Milli Vanilli.


Side one opens with the only single from the album “Closer to Fine”, which went to number 52 on the US Billboard Hot 100, number 26 on the Modern Rock chart and number 48 on the Mainstream Rock chart. I like the acoustic guitar on the opening of this one and the harmonies on the chorus. The lyrics are about taking a journey through life looking for answers. I often sing along to it, in part because it is one of the tracks from this album that my wife plays very often.

“Secure Yourself” opens with the chorus, a nice change of pace. This slower tempo track continues the same musical elements from the first track that I enjoy. It is a very relaxing song.

Michael Stipe of R.E.M. provides his unique voice to the backing vocals on “Kid Fears”. The song has a haunting tone to it, reflecting upon a traumatic event from childhood.

I really like the poetic imagery of the lyrics of “Prince of Darkness”. It is very much a commentary on dark times and how people slip down the road of morality into darkness. I like the positive affirmation that the singer will no longer tumble down that road.

“Blood and Fire” is a song about the longing that happens after a relationship ends with one party still in love. Sometimes that heartache is so real, so painful, that it feels like having been cut by a knife or burned by a flame. Anyone who has been there can relate to this song.

Side two starts off with a bit more up-tempo on “Tried to be True”, a song about growing fame and still trying to remain true to ones core beliefs and personality. Fellow Georgian musicians Mike Mills, Bill Berry and Peter Buck of R.E.M. played on this track.

“Love’s Recovery” is very much about denial in a relationship, sticking with something that is clearly failing in every way on the slim chance that it could improve. The couple sees the problems in others’ relationships but is unwilling to accept the problems in its own.

“Land of Canaan” makes its second appearance on an Indigo Girls album here (the first, with a slightly different musical arrangement appears on their debut record Strange Fire). I like the more country type of sound to this version which helps drive home the lyrics focus on loneliness that comes from being hundreds of miles away from your love.

The vocals take center stage for most of “Center Stage”; the guitars often fade quietly into the background.

“History of Us” closes out the album with one more song about moving on from a past relationship. Sometimes it takes traveling halfway around the world to gain perspective and the strength to move on.

Indigo Girls most certainly is, for the most part, a quiet and introspective record. The music is beautiful but does not overpower the voices, allowing Amy Ray and Emily Saliers to share their words with the listener.

At the time this record came out in 1989, it certainly was not the type of record I would have actively sought out on my own. I was still one whose penchant more leaned to upbeat dance rhythms and escapism. But that same year I would meet the woman who I would be spending all my days with, and she brings out in me a more serious, grounded side that can appreciate the things that the Indigo Girls offer musically. A great relationship is one where the whole is indeed greater than the sum of its parts. And for that I am eternally grateful.
Posted by Martin Maenza at 5:22 AM