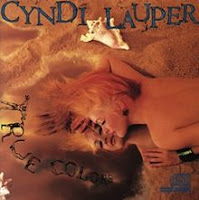 It took almost three years for Cyndi Lauper to release her second studio album. How could she ever hope to top the runaway smash success of her debut She’s So Unusual (click here for my review of that album)?

Turns out, she had nothing to worry about. 1986’s True Colors continued her successful career quite nicely. The album went multi-platinum in the US and Canada. Chart-wise, it reached number 4 in the US, number 7 in Canada, number 2 in Japan, number 25 in the UK and number 1 in Australia. It was nominated for two Grammy Awards and two MTV Video Music Awards.


Side one starts out with “Change of Heart”, the second single from the album (it reached number 3 on the US singles chart). The Bangles, who had opened for Cyndi on tour a year prior, provide guest background vocals on the track. I like the heavy cascading beat on this one; it sounds like someone is pounding it out on some heavy steel oil drums. It gives the song a bit of gritty-city feel to me.

“Maybe He’ll Know” is a remake of a song that Cyndi first recorded with her former band, Blue Angel, in 1980. Billy Joel provides guest backing vocals on this track. It has a nice 1950’s doo-wop feel to it, both in the vocals and the rhythm that always gets my toes tapping.

“Boy Blue” was a song that Cyndi wrote for a friend who had died of AIDS. You can really feel the emotion in her voice as she sings this one, truly one straight from her heart. As the fourth single from the album, it only reached number 71 on the US charts.

The title track “True Colors” was Cyndi’s second number 1 hit single; it was also the only track from the album that she did not have a hand in writing (Tom Kelly and Billy Steinberg penned the track). It knocked Janet Jackson’s “When I Think of You” from the top spot, and spent two weeks there before being replaced by Boston’s “Amanda”. This is my favorite track from the album; I love how her voice cuts through like a beacon on a dark night. This was definitely a slow dance favorite back in the day, and for some reason it always makes me a little misty eyed whenever I hear it even to this day.

“Calm Inside the Storm” is a track Cyndi co-wrote with 70’s rocker Rick Derringer who also played guitar on the track. I really like the drums and the swinging tempo on this one.

Side two opens with a cover of the 1971 Marvin Gaye classic “What’s Going On”. The original pondered the troubled times of the world. Cyndi’s version didn’t do as well on the charts as Gaye’s (his went to number 2 on the US charts; hers fell shy of the top ten by peaking at number 12) but I think it has some nice touches to it. It certainly helped make an important song relevant to a whole new generation of music listeners.

“Iko Iko” is a 1953 song that tells of a clash between two tribes of Mardi Gras Indians. Many artists have done their take on this one over the years, each adding their own flavor to the New Orleans classic. I really like how the previous track of the album leads into this one, using the percussion beats as the bridge between the two.

“The Faraway Nearby” is a track Cyndi co-wrote with Tom Gray, and the song features Aimee Mann of ‘Til Tuesday on guest vocals. The song mixes a little of tropical rhythms with a touch of new-wave synthesizers for an interesting sound.

Cyndi was friends with comedian Pee Wee Herman; she recorded the theme song to his kid‘s show Pee Wee‘s Playhouse. He returned the favor by doing the voice of the operator at the end of the track “911”. This one is a quirky, danceable track and very reminiscent to those from her debut album.

The album closes with “One Track Mind”, a song with a heavy and funky beat to it.

True Colors was released while I was working my co-op job for IBM between my junior and senior years of college. I originally picked this one up on cassette as that was an easier way to listen to music for me at the time (either on my boom box stereo at the apartment or in the tape deck of my car). This quickly became a favorite of mine from that year and remains a favorite to this day (it is one of the albums I have on both my iPhone and iPad as well as my iPod - always handy to listen to any time I want).
Posted by Martin Maenza at 5:31 AM