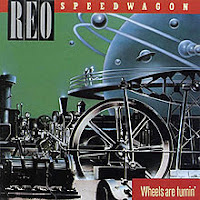 Happy birthday to guitarist/singer/songwriter Gary Richrath (born October 18th, 1949). In November of 1984, Richrath and his band REO Speedwagon released their eleventh studio album Wheels Are Turnin’. The record was certified Platinum in both the US and Canada; it made it as high as number 7 on the US Billboard Album chart and number 15 in Canada.

Side one opens with “I Do’ Wanna Know”, the first single from the album. It went to number 29 on the US Billboard Top 40 and number 5 on the US Rock charts. This song has a rollicking, up-tempo energy that makes it fun. It is the type of song that makes want to roll down the windows and crank the stereo up to share with everyone around.


As the third single “One Lonely Night” went to number 19 on the US Billboard Hot 100, number 17 on the US Mainstream Rock charts and number 10 on the Adult Contemporary charts. I really like this ballad; its gentle melody and the sweet vocals are a great combination.

“Thru the Window” opens with a catchy keyboard/bass interaction thanks to Neal Doughty and Bruce Hall respectively. It has a perfect covert sound to it, as if someone was slipping through the shadows of the neighborhood for a secret rendezvous. Of the non-single deep tracks this one is my favorite.

“Rock ‘N Roll Star” has a bit of a country feel to the rhythm and pacing on the first verse. As the chorus and additional verses build so too does the overall sound until we have a full rock treatment. That mirrors the rise in fame of the narrator’s “career”.

“Live Every Moment”, the fourth and final single, barely broke the US Billboard Top 40 (it peaked at number 34). In Canada, it stalled at number 85. The rhythm has a nice swing to it thanks to the light, Caribbean-like percussion. I also like the piano melodies through out it.

Side two begins with “Can’t Fight This Feeling”, the second single. The song went to number 16 in the UK, number 5 on the US Rock charts and number 3 on the Adult Contemporary charts. On the Billboard Top 40 charts, it dethroned Wham’s “Careless Whisper” at the number 1 spot and remained on top for three weeks until ousted by Phil Collins’ “One More Night”. This was an ultimate slow dance song back in early 1985. This is definitely my favorite track on the album. I can fondly remember dancing to this one with a young lady I was hoping to get to know a bit better, crooning along with Kevin Cronin on the chorus. If the stars were properly aligned, you would end up making out on the dance floor before the final notes of the song.

“Gotta Feel More” has a bit of a tribal beat courtesy of drummer Alan Gratzer.

“Break His Spell” is the only track that Richrath penned solo. It has a solid piano line to it and the pleasant vocal harmonies that the band is known for.

The title track “Wheels Are Turnin’” closes out the side. It has a driving, urgent rhythm that ends the album on a strong note.

I was in the first part of my sophomore year of college when Wheels Are Turnin’ was released. I can recall hearing these songs around campus, either coming from rooms in the dorms or at floor parties on the weekends. Though they were a lighter rock band, REO Speedwagon was still popular to those of who had grown up on the music of the late 70’s and early 80’s.
Posted by Martin Maenza at 5:23 AM

i met these guys in the 70; in a small town of Gillispe Illinois ..they spent the summer there with one of the guys grandmother ..i let one of them drive my car and he ran into three cars that were parked .. he was dranking .. he said he would pay for the car but never did ...a great bunch of guys ..---not-- never heard from them after that .. carol rhodes