Queen Latifah - All Hail the Queen 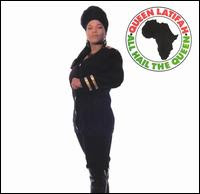 Although she started her career beatboxing for a rap group called Ladies Fresh, Queen Latifah (born Dana Elaine Owens) soon stepped out on her own making solo records on the Tommy Boy label. While hardly the first of the female rappers, she is certainly one who has had a very prominent career. She parlayed her music career into other outlets like television shows (like Living Single and her own talk show) and on the silver screen (in Chicago, Bringing Down the House, Beauty Shop, Hairspray and many more).


In 1989 at age nineteen, Latifah released her solo debut album All Hail the Queen. The record went to number 124 on the US Billboard 200 chart and number 6 on the Hip Hop/R&B Albums chart. It was ranked as one of the Source's 100 Best Rap Albums, and it also appears on the 1001 Albums You Must Hear Before You Die list.

The first side opens with "Dance for Me", which was also the first single from the record. The song features some samples that sound like they came from the Godfather himself, James Brown, as well as a little bit of Sly and the Family Stone (“Dance to the Music”). It definitely gets me in a dance mood.

De La Soul gives her a hand on "Mama Gave Birth to the Soul Children", the fourth and final single. Both of their albums came out around the same time, setting up a new age of hip-hop. Their raps, like Latifah’s, are complex and intelligent.

"Come Into My House", the second single, has a disco beat and sample that makes is very danceable. The hooks are infectious.

On the next track, she lays down "Latifah's Law" where she extols the virtues of keeping it real and not trying to impress others with status symbols.

"Wrath of My Madness" mixes samples along with background singers as part of its composition.

The album's producer Daddy-O lends a vocal hand on "The Pros"; he was one of the originators of hip-hop and rap in Brooklyn in 1981. This track has a slow Ska tempo to it. I really like how Latifah changes up her genres to rap against.

The second side starts with the third single "Ladies First". This anthem of female empowerment also features British rapper Monie Love, Latifah's protégée. These two are true microphone masters; they can clearly hold their own against any other rappers of the time and beyond.

New Jersey club deejay 45 King drops his amazing beats for Latifah to rap to on "A King and Queen Creation". It is a creative combo given both of their self-appointed royal titles.

"Queen of Royal Badness" is next. This is pretty much a rap standard in that it all about Latifah self-promoting. Luckily her rhymes are smart and sassy.

KRS-One, another Brooklyn rapper turned producer, is featured on "Evil That Men Do". This song takes on social injustices, another staple of early rap music. Latifah touches upon things that are present right outside our doors like homelessness and inequality between genders.

I like that "Princess of the Posse" has a slower, Jamaican rhythm to it for a change of pace. We also get a bit more of Latifah’s singing voice.

"Inside Out", with its slower tempo, is the final track on the album. The minimalist sample allows the vocals to be the main focus.

I picked up All Hail the Queen on cassette back in 1989 as I often did with rap and hip-hop releases. Something felt natural to play this genre of music either with my boom box or on my car stereo. I enjoyed Latifah’s rhymes because they came from a place of positive change. She wasn’t vulgar, she wasn’t offensive. She used her time on the microphone responsibly. The whole album is well put together with solid production values.
Posted by Martin Maenza at 5:23 AM