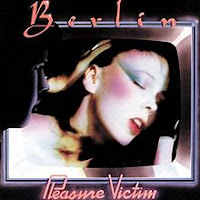 In January of 1983, the new-wave band Berlin released its second studio album Pleasure Victim. The album went to number 30 on the US Billboard 200 album chart, spending a total of thirty four weeks on the charts. It is easily the best selling album by the group.

Later CD releases included extended versions of some of the hit singles. But the original vinyl was just seven tracks strong and clocked in at just around thirty minutes in length.


Side one opens with “Tell Me Why”, the album’s first single. The opening is a rapid synth pulse, in a lower tone with a slower vocal which then picks up as Rod Learned’s drums kick in. Ric Olsen has a guitar solo near the end too. There are even some sci-fi laser blast sounds, kind of fitting since lead singer Terri Nunn had auditioned for the role of Princess Leia back in the 70’s.

The title track “Pleasure Victim” has a sensual synth sound to it thanks to David Diamond on keyboards and Nunn’s sultry voice.

“Sex (I’m A…)” was the second single. It went to number 62 in the US and number 5 in Canada. This is my second favorite track from the album and a four-star tune in my music library. The lyrics are all about sexual role-playing, in a very explicit and straightforward delivery. It is kind of interesting that Nunn tells of all the various roles she’s playing in the bedroom (goddess, geisha, one-night-stand, a dream divine) while the male vocal merely repeats “I’m a man”. I guess it speaks more to the fact that men often envision their partners in various different ways while not playing roles themselves. This was a great tune to dance to back in the day thanks to its driving rhythm, a guaranteed crowd pleaser.

Side two invites us to join the “Masquerade” with the fourth and final single; it went to number 82 on the US Billboard Hot 100. The lyrics tell of people who go through life living in a façade, hiding behind an appearance that is more acceptable or lucrative.

“The Metro” as the third single reached number 58 in the US. I absolutely love this song and rate it a five-star track on my iPod. The lyrics paint an amazing story of a young woman riding a train through Europe from Paris to London; the imagery is so descriptive that it brings the song to life. I love all the attention to the little details too. The coolest effects are the synth ones like the sirens and the sounds of the train moving along.

“World of Smiles” is next. It has a very typical new-wave sound to it that reminds me a tad of Devo. It is a nice track for a mix if you’re looking for songs from the era that weren’t as exposed as other songs. It is sort of a commentary on the fake side of Hollywood where everyone is all smiles even when they’re talking behind your back.

“Torture” closes out the album with a slower, moody piece. The lyrics are minimal as they speak of a relationship of abuse.

I was in high school, my senior year, when Pleasure Victim was released. My initial exposure to Berlin came from the local college radio station where these tracks were quite popular and from MTV who was showing the band's videos. The songs spoke to me on many levels: musically with the danceable rhythms, primally with the lyrical content, and romantically for some of the imagery. Nearly thirty years later, this record still remains a favorite of mine as it serves as a landmark on my musical journey through my school years.
Posted by Martin Maenza at 5:22 AM

I'm only familiar with three Berlin songs, two of which are on this album.

The first Berlin song that I ever heard was "The Metro," with its repeated "I remember" statements.

After the electro-synth feel of "The Metro," "Sex" (with a guitar solo) was something vastly different.


The last Berlin song I heard was "Take My Breath Away" - a good song in its own way, but something entirely different than the first two.