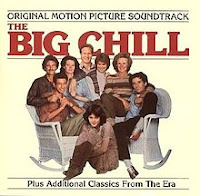 In the fall of 1983, a dramatic-comedy about baby boomer college friends coming together, after fifteen years apart, for the funeral of a friend hit the theatres. The all-star cast featured Tom Berenger, Glenn Close, Jeff Goldblum, William Hurt, Kevin Kline, Mary Kay Place, Meg Tilly and JoBeth Williams. This smart, funny and engaging film did very well at the box office, pulling in over $56 million dollars.

The Big Chill soundtrack album featured a who's who of Motown artists and more that perfectly spoke to the baby boomer generation. The album went gold within the first few months on the charts and then Platinum in early 1984. It reached number 17 on the US Billboard 200 album charts. It did so well that a second album The Big Chill: More Songs from the Original Soundtrack was released a year later. Today I will just focus on that first record.

The Temptations are next with "My Girl" from 1965. The song was a number 1 hit on both the Billboard pop and R&B charts; in fact, it was number 1 on the R&B charts on the day I was born. Those iconic guitar chords get me swaying right from the start and keep me going the entire time.

From 1966 come the Young Rascals and their number 1 hit "Good Lovin'". This song has an infectious rhythm that goes right to my core and the high energy picks me up every time. I like Felix Cavaliere’s organ solo too.

Smokey Robinson and the Miracles provide "The Tracks of My Tears" from 1965. This song, which reached number 16 on the Billboard pop charts and number 2 on the R&B charts, is one of the group's best sellers. The song has also been covered by numerous artists over the decades from the Jackson 5 in 1968 to UB40 in 2010. The lead vocals by Robinson are like sweet honey.

Three Dog Night proclaims "Joy to the World" on their 1971 number 1 hit (it spent six weeks at the top of the charts). This is one of those songs I can vividly remember singing a lot as an elementary school kid in the 70’s - the first verse and the chorus. I really love how the many vocal layers blend on the chorus especially.

The Temptations return with "Ain't Too Proud to Beg" from 1966. Though it only made it to number 13 on the Billboard pop charts, it did spend eight non-consecutive weeks at number 1 on the R&B charts. This song is used in a memorable scene in the film: it is the morning after the funeral and the friends are all pitching in to make breakfast in the kitchen, dancing around to this tune on the radio. It is hard to sit still when this one is playing; my feet naturally start to shuffle.

Aretha Franklin's anthem "(You Make Me Feel Like) A Natural Woman" closes the first side. The track reached number 8 on the Billboard charts in 1968. The Queen of Soul is perfectly in her element on this one, her voice singing through like a beacon. When I hear this song, I can’t help but think of actress Candice Bergen in her title role of the sitcom Murphy Brown singing the background sha-doops.

Side two opens with the return of Smokey and the Miracles with their 1967 hit "I Second That Emotion". It spent three weeks at number 4 on the US Billboard charts, behind the Beatle's "Hello Goodbye" at number 3.

Next are the British band Procol Harum and their 1967 track "A Whiter Shade of Pale". This debut single spent six weeks at number 1 on the UK charts; it went to number 5 on the US Billboard charts. The slower melody of the song is based on Bach’s cantata “Sleepers Awake”. This one puts me in a very mellow mood, almost a complete contrast from the rest of the songs on the album. It makes it stand out because of that.

The oldest track on the record is from 1963 and the Exciters. "Tell Him" reached number 4 on the Billboard charts and spent two weeks at the number 1 spot on the French charts. This one always makes me thinking of Ally McBeal as it was one of her therapy songs in the early seasons when she was trying to deal with her feelings for her childhood sweetheart Billy. I actually have four versions of this song in my music library, including this original and the one Vonda Sheppard did for the TV show.

The Four Tops are up with "It's the Same Old Song" from 1965, a track that went to number 5 on the Billboard charts and number 2 on the R&B charts. I love the harmonies of this Detroit quartet.

Martha and the Vandellas get us "Dancing in the Street" with their 1964 smash. The song originally went to number 2 on the Billboard charts, stopped short by the Animals’ “House of the Rising Sun”. I have five versions of this song by various artists in my music library, including this original. It is another of those good-mood tunes.

Marvin Gaye returns with his 1971 hit "What's Going On". The song about anti-war protests went to number 2 on the Billboard charts, denied the top honors ironically by the earlier track “Joy To The World”.

Closing out the record is the Marvelettes and their 1964 track "Too Many Fish in the Sea". The song went to number 25 on the Billboard charts.

When the Big Chill came out in 1983, I had just started my freshman year of college. I do remember seeing this film in theatres with friends of mine - it might have been when I was home on Thanksgiving break that November with my friends from high school. Though the film was about a generation removed from my own, I still could relate to the subject matter and sentiments in a way. Maybe it was just the wondering if my friends and I would still be close another fifteen years in the future. When my wife and I got our first DVD player in the later half of the 90's, this was one of the first films I remember we bought.

As for the soundtrack, I had this one on vinyl and played it a lot. I was very familiar with many of these songs from listening to AM radio growing up in the 70's and from watching many a TV variety show. I thought it was a great music sampler with a large number of classics and thus perfect to have in my music library. I would supplement it early in 1984 with a two disk Motown collection that came out to celebrate the label's 25 anniversary. 1960's music was very big at college parties, no doubt spurred on thanks to the renewed interest thanks to the film. Of course, both those vinyl sets ended up with my brother in the late 90's. By that point I had picked up a boxed set of Motown music on CD. The songs are timeless and never go out of style.
Posted by Martin Maenza at 8:25 AM