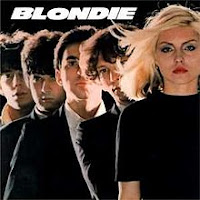 Guitarist Chris Stein had been playing in bands in New York City since 1973, which is when he met singer Debbie Harry, a former waitress and Playboy bunny. They went from the Stilettos to Angels and the Snakes. That later band eventually changed their name to Blondie in late 1975. Their self-titled debut album was released on an independent label in December of 1976 and enjoyed some moderate success in Australia (number 14 on the charts) and the UK (number 75). A year later, they signed with Chrysalis Records and Blondie was re-released.


Side one opens with "X Offender", the first single from the record. The original title was "Sex Offender" with a subject about an eighteen year old boy being arrested for having sex with his underage girlfriend. The lyrics were changed to a song about a prostitute being attracted to a police officer who had arrested her. The song has a classic 60’s girl-group feel to it, which makes sense given that Richard Gottehrer produced the track and he worked with the Angels (“My Boyfriend’s Back”) in the 60’s. I like Jimmy Destri’s keyboards on this one.

"Little Girl Lies" continues that classic rock feel thanks to the guitars of Stein and Gary Valentine. They get a surf rock riff going at the end.

"In the Flesh", the second single, went to number 2 on the Australian charts. It has another great piano line as well as backing vocals by Micki and Hilda Harris. The song has a wonderful 50’s doo-wop sound even though the lyrics are quite carnal, sold perfectly by Debbie’s sweet vocals.

"Look Good in Blue" has a bit more of a contemporary sound with an up-tempo, almost rumba rhythm driven by Destri’s piano.

"In the Sun" is undeniably a surf-rock number that features Clement Burke’s drumming. The song contrasts the urban jungle of the band’s native New York City to a tropical beach full of sand and fun.

"A Shark in Jets Clothing" naturally brings up thoughts of West Side Story, the classic Broadway play that adapts Romeo and Juliet to a modern, gang-filled New York. The song is a nice homage.

Side two kicks off with "Man Overboard", a funky little number. I really like how Blondie is able to mix up their styles seamlessly on this record. It shows their depth in music appreciation and skills to adapt that into their own original compositions.

"Rip Her to Shreds", the third single, went to number 81 on the Australian charts. The lyrics paint a picture of what gossip columns do to people's lives. The song was recently used during the opening and closing credits of the 2011 film Bridesmaids. As a comic strip fan, I love the reference to Brenda Starr; I used to read this soap opera strip daily in the 70’s and 80’s whenever I would go visit my grandmother’s house. Debbie has great attitude on this one too. This is definitely my favorite from this album.

"Rifle Range" has a moody sound to it, perfectly fitting to the lyrics.

"Kung-Fu Girls" is very much a punk song, in tempo and attitude. I can just imagine that the band must have really worked up the crowds at CBGB’s with this one.

"The Attack of the Giant Ants" closes out the record on a festive and quirky note. This song plays homage to monster B-movies of the 50’s, complete with sound effects and sirens, with a carefree Calypso accompaniment. How can you not smile listening to this one?

Though it came out in the mid-70’s, Blondie is a wonderful contribution to the punk and new wave sounds that were evolving. This band clearly was on to something, and their solid debut record is an indication of that. Any of my 80’s music-loving followers owe it to themselves to check this one out (though I am sure many of them already have it in their music collections).
Posted by Martin Maenza at 8:02 AM