Vanilla Ice - To The Extreme 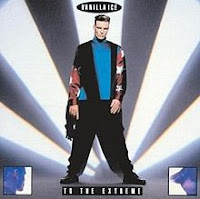 Happy Halloween! Time for some tricks and treats. Today also happens to be the birthday of rapper/extreme athlete/home-improvement TV personality Rob Van Winkle, known by the stage name of “Vanilla Ice”.

Ice’s debut album was first released in 1989 on Iciban Records, an independent record label, under the title Hooked. He was then signed to SBK Records who reissued the album under its current title of To the Extreme. Despite mixed reviews, the record did extremely well. It spent sixteen weeks at the number 1 spot on the Billboard Hot 200 album charts, ranked at number 20 on that same charts end of the decade (1990-1999) list of sellers.

Side one opens with “Ice, Ice Baby”, which won the People’s Choice Award for Best New Song in 1991. The single went to number 1 in the US, Australia, New Zealand and the UK; it was the first hip hop single to reach the top of the US Billboard charts. Ice wrote the lyrics at age sixteen based upon his own experiences growing up in South Florida. The song’s key hook is a sample from “Under Pressure” by Queen and David Bowie, which makes the song for me instantly infectious. I remember how this one was a huge hit in the clubs back in the day, one that would get everyone on the dance floors. I liked this song so much back then that I can still, to this day, quote many sections from it verbatim. “Word to your mother.”

“Hooked” opens with some old-school scratching and has a slow but steady R&B rhythm. The lyrics are advice to a buddy who is hung up on a particular woman who slept with him once and now treats him nonchalantly.

“Ice Is Workin’ It” is next. The song is a rap tradition where the MC boasts his praises. I like the funky rhythm to it. “Life Is a Fantasy” is a wet dream delivered via a rap on a bed of steady, grinding beats.

Closing out the side is the albums second single “Play That Funky Music”, which reached number 4 on the US Billboard charts and number 10 in the UK. The song samples Wild Cherry’s 1976 number 1 hit by the same title. I like the tag-line “go, white boy, go, white boy, go”.

Side two opens with “Dancin’”, which samples the Jackson 5 in a couple of ways, including some signature young Michael call outs to the crowd. The cuts work very well here and make or a good song to dance to.

“Go Ill” goes back to the master, James Brown, for its samples. “It’s a Party” is next. It has a decent, general groove.

After another short segue called “Juice to Get Loose Boy” comes “Ice Cold”. This one doesn’t have as catchy of a hook as some of the other tracks. When the raps sound so similar, a good hook helps to make the song stand out. I did hear a little bit of “the Brady Bunch” theme (the first couple notes) in the mix their briefly.

“Rosta Man” has an island swing to it as Ice adopts a reggae accent. It is a nice change of pace.

“I Love You” was the third and final single from the album. It only reached number 52 in the US and number 45 in the UK. For this track, Ice goes for a smooth R&B ballad. Again, it is a nice change of pace and reminds me a little L.L. Cool J’s “I Need Love”.

The record closes out with the slightly over a minute “Havin’ a Roni”. The track features heavy beat-boxing.

I owned To the Extreme on cassette back in the day, purchased initially because of the big club hits. This one got a lot of play in the cassette deck of my car; the tunes were a great way to get into a weekend mood. The production values on this album are very good, positioning this as one of a group of albums that transitioned hip-hop into a new decade.

Despite everything that Vanilla Ice went through as the 90’s progressed, you cannot deny the accomplishments of this debut record.
Posted by Martin Maenza at 12:06 AM