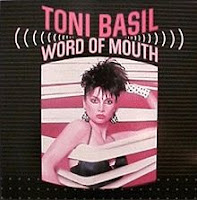 Toni Basil came from a family of entertainers. Her mother was a vaudevillian acrobatic comedian and her father was an orchestra conductor. She started out dancing at a very young age but later got into doing choreography for TV variety shows and concerts for the likes of David Bowie, Bette Midler and the Talking Heads. She was also an actress and appeared in a number of films including Five Easy Pieces, American Graffiti and Easy Rider. Her recording career actually began back in 1966 when she recorded a single for the short film Breakaway.

But most people will know her for the hit single "Mickey" from her April 1982 debut album Word of Mouth. The album sold very well on the strength of that one song, peaking at number 22 on the US Billboard 200 chart and achieving a Gold certification in sales.


Side one opens with "Mickey", a single that went double-platinum. It went to number 1 in the US (knocking off Lionel Richie's "Truly" and preceding Hall & Oates' "Maneater"), Canada and Australia, and to number 2 in the UK and New Zealand. The song was based on "Kitty" which was written by Mike Chapman and Nicky Chinn and recorded by the UK group Racey in 1979. Toni flipped the gender around and based it on Mickey Dolenz of the Monkees whom she worked with as a choreographer on their film Head. The music video for "Mickey" is classic and infectious, featuring Toni along with a squad of cheerleaders in a choreographed routine.

"Rock On" is another Chapman/Chinn penned track. This time, though, Toni just puts a new-wave synth spin to the 1974 top-ten hit originally performed by David Essex. I really like what she did with this one, making it very danceable.

"Shopping From A to Z" was the record's second single; it failed to make much progress on the charts though (it only went as high as number 77). The song has a nice new-wave groove to it and the lyrics are pretty catchy. Where it probably turned folks off was the alphabet picture book like shout-outs for items for each letter of the alphabet (twice).

"You Gotta Problem" is a Devo track written by Mark Mothersbaugh that was originally titled “Pity You“ from their 1981 album New Traditionalists. Mothersbaugh along with Gerald V. Casale from the band played on this and a number of other tracks on Toni’s album, thus it gives the record a very familiar sound.

"Be Stiff" was also a Devo track, this one written by Casale which appeared on the 1977 Devo EP Be Stiff. Toni was an early supporter of the band; she and Gerald were also in a relationship at the time.

Side two starts with "Nobody", a track by Los Angeles based songwriter Paul Delph. He played the synthesizers this track and the Farfisa organ on “Mickey”. This song has a nice driving beat to it and plenty of defiant attitude.

"Little Red Book" is a cover of a Burt Bacharach/Hal David song that Manfred Mann recorded in 1965 for the soundtrack of the film What’s New, Pussycat?. This version sounds right at home with the early 80’s alternative sounds as Toni and the guys remake it for an audience who was still in diapers when the original came out (I know I was in early 1965, being just a few months old).

"Space Girls" was a re-recording of a 1974 demo by Devo called "Space Girl Blues". Toni’s vocals are delivered in an unemotional, clipped style as if she were indeed from another world.

Toni co-wrote the next track, "Thief on the Loose", along with Greg Mathieson who also played synthesizer on the album. This song has a bit more of a rocking vibe to it, thanks to the guitars and the driving drum beat.

"Time After Time" closes out the side and the record. Again, this one has a bit more of a rock slant to it, allowing Toni to showcase her vocals. She actually has a pleasant singing voice and can carry a melody very well. This one definitely does not suffer from the “last track on the album thus weak” syndrome; I like it quite well and feel it could have made a great follow-up single.

I was in high school, my junior year in fact, when Toni Basil hit it big with "Mickey". I was a huge fan of the song back then (and still today) thus I happily put down my ninety-nine cents (plus tax) at the local record store to get the 45 rpm single. I remember seeing the album in the record stores too but never picked it up, most likely because she didn't have a second big hit off of it. “Mickey” was a huge favorite as school dances during my senior year as well. Lots of good memories for this song.

Late last year, when emusic.com expanded its offerings on the major labels, Toni's compilation of songs from her two albums showed up. I downloaded it which provided me most of the Word of the Mouth album. Since then, I've been pleased to have the songs pop up in my 80's music rotation. The new wave sound from this record is right at home in my music library - definitely an often forgotten treasure from the time period.
Posted by Martin Maenza at 5:21 AM