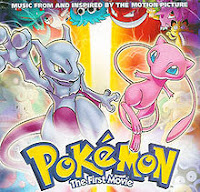 Just around Thanksgiving time in 1999, my four year old son had me take him to the movies to see Pokémon: The First Movie. He had recently become a fan of the syndicated television show and was getting into playing the video game on his Gameboy Color. Of course, the studio added the incentive of free exclusive Pokémon trading cards with each ticket purchase to encourage kids to see the film. Having watched the program and played the game myself, I was open to an afternoon of animated distraction (and it got him a second card as well).

Shortly after that he learned that the soundtrack CD was released and included a mail-in offer for an exclusive trading card. So, that Christmas he received the CD as a present. He was much more interested in the card than the music. Still, we would take the CD in the car with us for trips since we deemed it kid friendly pop music. Who knew I would be the one to enjoy the disk more than he?


The album itself sold very well around the world, no doubt in part due to the variety of musical artists featured on it. In the US it went to number 8 on the Billboard 200 chart and achieved double Platinum sales status. It went to number 2 in France, number 8 in Austria, number 9 in Australia, number 10 in Canada, number 14 in Sweden, number 17 in Finland and number 18 in New Zealand.

The first track is "Pokémon Theme Remix", an extended version of the TV show theme song performed by Filipino-American singer Billy Crawford. Clearly, this was a favorite of the boy. Me, I tended to skip over it if I was listening by myself. After watching hundreds of episodes on TV, you sort of burn out on it quickly.

M2M, a Norwegian duo made up of Marion Elise Raven and Marit Elisabeth Larsen, provide "Don't Say You Love Me". The track would also appear on their 2000 debut album Shades of Purple. It has an acoustic guitar opening that moves into a more fleshed out pop song. The M’s have a nice harmony, especially on the chorus.

Ashley Ballard, a newcomer to the music scene, is next with "It Was You". She is joined by the group So Plush on this sweet R&B mid-tempo tune.

Christina Aguilera, whose debut album debuted a few months earlier, belts out the power ballad "We're a Miracle". What amazes me is the incredible talent she had right out of the gate; there is a reason Christina is a super-star - her vocal mastery.

Britney Spears sparkles with "Soda Pop", a track that first appeared on her 1999 debut album ...Baby One More Time. The song features a reggae styled rap on the chorus and a slow but danceable groove. It makes me think of a sunny day at the beach for some reason.

'N Sync, the American boy-band from Florida whose smash debut album came out in 1998, promises "Somewhere, Someday". It is a smooth pop ballad that shows off the group’s harmonies quite well.

B*Witched, a girl group from Ireland advises us to "Get Happy". This track is bouncy and fun, with a stomping beat and a call-answer delivery on the verses. My head bops along to it every time I hear it.

Emma Bunton, best known as "Baby Spice" from the UK super-group the Spice Girls, is next with "(Hey You) Free Up Your Mind". The mid-tempo song has a bit of a funky groove to it, and the lyrics are carefree.

Brothers Nick and Drew Lachey started out as half of the boy band known as 98 Degrees. "Fly With Me" is their offering to this CD; this is another mid-tempo groove with smooth vocals.

Before taking the professional name of Willa Ford, Amanda Lee Modano recorded under the stage name of Mandah. "Lullaby" ties in directly to Jigglypuff, the Pokémon whose sweet song puts people to sleep.

Colleen Ann Fitzpatrick was originally part of an alternative rock band called Eve's Plum. When the band broke up in 1998, she went solo under the name of Vitamin C with her first solo album in 1999. Her track on the album is "Vacation", an up-beat surf-rocker that always puts me in a good mood. In fact, this track is our family holiday song - we often quote it when we are heading off on a trip (which tells you how often my wife and I played this CD in our cars back in the day).

English singer Billie Piper, who would later go on to play a companion on Doctor Who, was a teen pop star back in the late 90‘s. "Makin' My Way (Any Way That I Can)" sounds right at home with the other teenaged gals on this record.

Seventeen year old Angela Via's "Catch Me If You Can" was her first recorded release. The chorus and the bouncy rhythm are infectious. The lyrics tie directly into the whole “gotta catch ‘em all” aspect of Pokémon.

Aaron Carter, who was born in 1987, had one album under his young belt by the time this soundtrack came around. His contribution is "(Have Some) Fun With the Funk", another of my favorites from this collection; it has a jamming beat that gets my feet moving and grooving. Like the lyrics advise, I definitely want to turn up the bass on this one.

Midnight Sons is next with the sweeping ballad "If Only Tears Could Bring You Back".

Blessid Union of Souls closes the record out with "Brother My Brother". This American rock band from Ohio had been together since 1990 and had made a splash on the charts in the middle of the decade; this soundtrack corresponded to the release of their third album in 1999. I became a big fan of the band thanks to this song, my third favorite from this group of sixteen. It has a positive message of peace and unity.

I guess one of the reasons I came to enjoy the Pokémon: The First Movie soundtrack was because it does serve as a nice pop-music sampler for the turn of the century. A number of performers made their debut on this record or were supporting the first releases from that year. It is a good mix of music that was not overplayed on the radio at the time so many of the tracks still have a newness to them.

The other reason, of course, is that it serves as a reminder of a time when my son was still a kid and looked up to his father with that idyllic glint in his eyes. That's one of those perks you get from being a parent. It makes up for the "terrible twos" and the rebellious teenaged years. *wink*
Posted by Martin Maenza at 8:09 AM