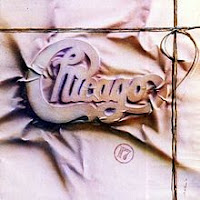 On May 14th of 1984, the American rock band Chicago released their seventeenth studio album aptly named Chicago 17, a follow up to their comeback album a few years earlier. Composer and keyboardist David Foster was the producer of this multi-Platinum record, which reached number 4 on the US Billboard 200 during its seventy-two weeks on the chart. In the UK, the release reached number 24. It was also the last album for the group that vocalist and bass player Peter Cetera performed on; a year later Cetera quit the group to embark on a solo career.


Side one starts with “Stay The Night”, the album’s first single. This Cetera/Foster collaboration reached number 16 on the Billboard Hot 100 and number 7 on the Mainstream Rock charts.

“We Can Stop the Hurtin’” features a number of guest background vocalists including Donny Osmond and Richard Marx. The guitars on this one set up a cool and bouncy groove.

The second single, “Hard Habit to Break”, went to number 3 on both the Billboard Hot 100 and the Adult Contemporary charts. It was also nominated for the Grammy Award for Record of the Year in 1984. I can remember fondly this one being a slow-dance favorite back in the day, with its gentle swaying tempo and sweet harmonies.

I like the echoing effect of the percussion on the mid-tempo “Only You”, a sound popular in some music at the time.

The side ends with the ballad “Remember the Feeling”, which showcases the harmony between Cetera and Bill Champlin, the co-writers of the track.

Side two opens with “Along Comes a Woman”, the fourth and final single. It went to number 14 on the Billboard Hot 100, number 25 on the Adult Contemporary chart, and number 10 on the Mainstream Rock charts. I really like the rhythm on this one, very infectious and catchy.

“You’re the Inspiration”, the third single, went to number 3 on the Billboard Hot 100 and number 1 on the Adult Contemporary chart. There is no denying that the song is beautifully done, from the orchestration to the declaration of love in the lyrics.

“Please Hold On” was co-written by the band’s guitarist/keyboardist/vocalist Champlin, Lionel Richie and Foster. Champlin takes the lead on this funkier groove. I like the swagger to the rhythm and the supporting horn sections.

“Prima Donna” appeared on the soundtrack for the motion picture Two of a Kind which starred John Travolta and Olivia Newton-John. The song is an up-tempo number with rocking guitars.

The final track “Once in a Lifetime” was written by the band’s trombone player James Pankow. No surprise it features some great elements for his instrument too.

I was in my freshman year of college when Chicago 17 was released. While my music tastes were firmly entrenched in the new-wave/alternative and R&B/dance camps at the time, I still occasionally would revisit lighter Top 40 sounds for a break. It would be there and some night spots that I would occasionally hear the songs from this record. I definitely enjoyed Chicago a lot as my early days of music listening as a child and pre-teen fell into this category. There is no denying that Chicago made some amazing music that could be enjoyed by a large audience from various walks of life.
Posted by Martin Maenza at 5:24 AM