The Bangles - All Over the Place 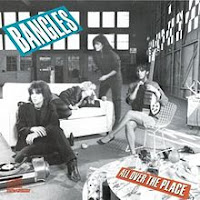 The all-girl band that would eventually become known as the Bangles started out in Los Angeles in late 1980 when Susanna Hoffs (rhythm guitar) joined sisters Vicki (lead guitar) and Debbi Peterson (drums). In 1982, bassist Annette Zilinskas joined them and they recorded an EP.

When she left, former bassist for the Runaways, Michael Steele, joined up and the quartet of women released their first full length studio album All Over the Place in June of 1984. This first album went to number 80 on the US Billboard 200 album charts and number 86 on the UK album charts.


Side one starts off with “Hero Takes a Fall”, the album’s first single. This mid-tempo romp has a catchy little rhythm to it.

“Live” has a bit of a honky-tonk sound to it thanks to the guitars. This song is a cover of the 1967 song written by Emitt Rhodes and performed by his band the Merry-Go-Round.

“James” is a song written by Vicki Peterson about a guy who is more trouble than he is worth but totally hard to quit.

“All About You” has a rapid fire pace to it that shows off the musicianship of the band nicely.

“Dover Beach” opens with some reverberating guitar. Hoffs’ entrancing vocals then sing about running away with her love to a secluded place.

Side two begins with “Tell Me”, another quick tempo tune. The guitars blend as well as the vocal harmonies on this one.

The rocker “Restless” has an older sound to it. Clearly Hoffs and Vicki have a strong affection for classic rock as this one, and their other co-penned tracks have that feel to it. This was definitely a bit different of a sound than what many of the other 80’s groups were doing, especially the girl groups.

In 1983, Kimberley Rew recorded the song “Going Down to Liverpool” with her band, Katrina and the Waves. The Bangles released their version as the second single from the album in 1985. I like this version as the vocals have more harmonies than the original; it is definitely my favorite track from this record. The video for the song, by the way, featured Leonard Nimoy in the role of the band’s chauffeur.

“He’s Got a Secret” has a nice swagger to its rhythm.

“Silent Treatment” has a little bit of a Beatles’ sound to it, likely due to the three guitars sound that the gals employ.

“More Than Meets the Eye” has a slower, almost melancholy, tempo to it and employs a bit of orchestration to it. The track definitely stands out as different, but it also showcases the vocal harmonies of the band quite nicely.

I picked up this album on cassette back in 1986 during my junior year of college. The Bangles’ second album was popular at the time and I was very interested to get more music from the group besides that record. While some might dismiss this debut album as weak because of its lack of hits, I kind of disagree. I think All Over the Place shows the raw potential of the Bangles before they were polished up by the record-label marketing machine. This album certainly is an accurate view of what the band sounds like live in concert.
Posted by Martin Maenza at 5:24 AM