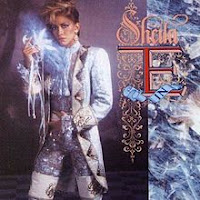 After a solid debut the previous year (click here for my review of The Glamorous Life), singer-drummer-percussionist Sheila E. followed it up with her 1985 second studio album Romance 1600. Like her first record, Prince had a strong hand on many of the songs, enhancing her musical style and persona. This record went to number 50 on the US Billboard Album chart and number 12 on the US Billboard R&B Album chars.


Side one starts off with what appears to be a chaotic opening for “Sister Fate”, with instruments rushing about here and there. But at the eighteen second mark, Sheila’s percussion kicks in and establishes the beat for this track’s groove. I love how the organ (played by Ken Grey) and the saxophone (thanks to Eddie M.) add to the funky, jazz styling too. It is a very energetic way to start this album off.

“Dear Michaelangelo” tricks you and thinks it will be a slow, gothic kind of ballad but then those drums again prove you wrong. Unlike the first track, this one also has prominent guitar (Stef Burns). The lyrics are an ode to the 16th century Italian Renaissance painter, of course.

The longest track on the record is “A Love Bizarre” which clocks in at twelve and a quarter minutes. The song is a duet between Sheila and Prince; as a single the track went to number 11 on the US Billboard Hot 100, number 2 on the US R&B Songs and number 1 on the Hot Dance Club Play charts. This is my favorite track on the album, and it was a favorite dance song of mine during my middle college years. Because of the song’s length, you can really let the rhythms work into your brain and take control of your whole body. When I danced to this one, it transcended me to another plane.

Side two opens up with “Toy Box”, a song that has a similar note progression to another Prince tune - “Blue Limousine” - that he penned for Apollonia 6’s 1984 album. Of course, lyrically it is very different as is the percussion lines. And those lyrics, well they have a lot of sexual symbolism in them (“…sister’s got a place she goes whenever she’s lonely, she’s got a toy box…”) and some pent up frustrations to boot.

“Yellow” has a cool, jazz swing to it with Sheila and Prince doing a call/answer approach to the vocals.

The title track “Romance 1600” has a pacing like a well-run machine; the rhythm is on the off-beat which gives you the feeling like you’re trying to hurry to catch up with it. I think that makes for an interesting musical effect. Finally, it winds down on the last fifteen seconds or so.

The instrumental “Merci for the Speed of a Mad Clown in Summer” is next. It opens with sounds of a carnival before barreling forward at a breakneck pace. This fun composition reminds me a lot of Prince’s Madhouse project in the mid-80’s, a jazz fusion group.

“Bedtime Story” closes the record out with a sultry love song. The cool thing about this song is that it has a skip-rhythm to it that makes it sound like an old vinyl recording that is just so slightly warped, an old familiar record that brings you such comfort that you can overlook its worn out sound. I like it a lot.

Romance 1600 came out after my sophomore year in college when I was working for six months in New Jersey. I remember picking this one up on cassette one weekend and playing it until the tape wore out many years later. Since then I’ve replaced that copy with a CD version. Sheila E. is one of those artists that never fails to disappoint me. Her rhythms are so infectious and memorable. This is another one of those albums that I never tire listening to.
Posted by Martin Maenza at 5:25 AM

Oh how I loved Sheila E.!! I owned the Glamorous Life and Romance 1600 as well. She's a heck of a percussionist, and someday would love to get a set of her signature bongos! She was the gateway music that turned me on to Salsa, and I love listening her play with her father and brothers "The Escavedo's".

Nice article! Brought back some great memories!! By the way.. I swung by via ApacheDug's blog. Glad to have found your site!

Darrin, so glad you found the blog through Doug's page. I love having the feedback so keep it coming.

I agree totally about Sheila E. and her music.