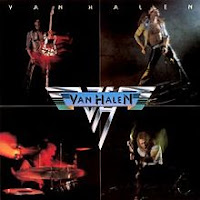 On February 10th of 1978, the California based rock quartet Van Halen released the self-titled studio debut album Van Halen. The record was a huge seller (over 10 million copies) and it went to number 19 on the US Billboard Album charts, number 18 in Canada, number 24 in the UK and number 5 in Germany. Rolling Stone magazine ranked the album at number 415 on its list of the 500 Greatest Albums of All-Time.

Side one takes off by “Runnin’ with the Devil”, a song whose lyrics were inspired by the Ohio Player’s song “Runnin’ from the Devil” from their 1974 album Fire. Those opening guitar chords tell the listener that this band is ready to rock their world. This track was the second single from the album; in the US it only made it to number 84 but in the UK it went to number 52.

Next up is the one and three quarter minute instrumental “Eruption”, that features Eddie Van Halen in a searing guitar solo. The track was ranked by Rolling Stone magazine at number 6 on its list of 100 Greatest Guitar Tracks.

The Kinks originally recorded “You Really Got Me” in 1964, taking it to number 7; Van Halen’s cover, which was also the band’s first single, went to number 36. Ray Davies has gone on record to say he dislikes their version. For me, I’m pretty cool with this hard rocking rendition as Van Halen adds a nice 70’s sleaze to it.

As the third single, “Ain’t Talkin’ ‘Bout Love” failed to make the charts. However, it proved to be a very popular track on album-oriented rock stations. I really like the cascading opening guitar riff, which the British dance act Apollo 440 sampled for their 1997 single “Ain’t Talkin’ ‘Bout Dub”.

“I’m the One” closes out the side with the rapid-fire guitar from Eddie and bassist Michael Anthony that made the band famous. Of course, drummer Alex Van Halen has no problem keeping up. It is a strong finish to a solid first side.

Side two begins with “Jamie’s Cryin’”, a song about a woman who refuses a one-night stand and later is sad about what might have been. Tone Loc sampled the song for his 1988 single “Wild Thing”.

“Atomic Punk” is up next. Now, I have to admit that I am not as big of a fan of this track as I am of some of the others. Maybe it is that scratchy opening.

“Feel Your Love Tonight” shows off the guys’ harmonies on the chorus and features yet another amazing guitar solo.

“Little Dreamer” brings the tempo down to a nice slow simmer.

David Lee Roth plays the acoustic guitar on “Ice Cream Man”, a bluesy kind of track that uses innuendo about the neighborhood frozen treat salesman to describe his relationship. The rest of the band joins in for the second half, kicking it back into the rock end-zone.

The guys are very much “On Fire” with the final track, closing out the debut on a high note.

I was in eighth grade when this album came out and, I will admit, wasn’t so much into the cool rock like other guys were. Luckily, I had an older brother who was a senior in high school and thus was able to be exposed to a lot of bands from him. Van Halen was very popular with his class too. As I grew older, I learned to appreciate the band a lot more. Besides, if Eddie Van Halen could land the babe of my teenaged dreams Valerie Bertinelli, there had to be something to his music, right?

Over three decades later, this debut still holds up very nicely.
Posted by Martin Maenza at 7:46 AM