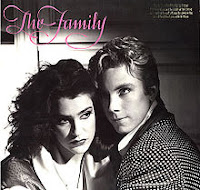 In 1984 when the Time was breaking up after Morris Day departed for a solo career, Prince suggested that the band restructure with Paul Peterson as the lead. When that fell through, he invited Peterson (lead singer and bassist), Jerome Benton (vocals and percussion) and Jellybean Johnson (drums) to take part in a new project. He also brought in Eric Leeds on saxophone and flute and Susannah Melvin (vocals and keyboards) who wasPrince’s then-time fiancée and the twin sister of Wendy Melvoin.

In August of 1985, the group released their first album, the self-titled The Family. The album did fairly well on the Billboard R&B charts, spending a total of twenty nine weeks on the chart and peaking at number 14. It also spent twenty-two weeks on the US Billboard Album chart, peaking at number 62. All tracks were written by Prince except where noted.


Side one opens with “High Fashion”, the first of a number of incredibly funky grooves. The song tells the tale of rich society girl with impeccable taste in clothes and the man trying to catch her eye. The guitar rhythms are tight and infectious.

The dance party continues with “Mutiny” which shares a similar driving drumbeat. I can barely keep my feet still when this one is on; I want to crank it up and work it out with the groove. Leeds’ saxophone perfectly supports Peterson’s vocals.

The sole single from the record was “The Screams of Passion”, a mid-tempo tune full of sexy steam. This is my favorite track from the record. I love how Peterson’s and Melvoin’s voices play off one another in this duet; if there wasn’t any chemistry between the two at the time you could have fooled me.

“Yes” is the first instrumental on the record. It is a funky groove with a thudding beat, heavy bass and smooth sax. It is tracks like this that were the precursor to a jazz-fusion project Prince would put together a year later called Madhouse.

The second side kicks off with “River Run Dry” which was written by Bobby Z, the Revolution’s drummer. It starts out with a mid-tempo for the first verse and then picks up for the later part of the song. I like the way this song expresses loss over an ended relationship.

Most people know of Sinéad O’Connor‘s 1990 version of “Nothing Compares 2 U” (it spent four weeks at number 1 on the US Billboard charts). However, this Prince song was done first by the Family on this album. Peterson brings the emotion to the lyrics with Melvoin adding her own voice on the chorus. Clare Fischer’s beautiful orchestration and strings also give the song a grand romantic touch. I'm actually partial to this version over the hit one. To me this will always belong to the Family.

The album closes with another ballad. The music on “Desire” creates the illusion of a rainy day, from the drip-drip of the guitars and keyboards to the gentle hand-percussion. It all creates a sad, longing mood that supports the lyrics very well.

When The Family was released I was working in New Jersey on a co-op assignment (between my sophomore and junior years of college). I picked the album up on cassette and instantly was hooked. I spent many a weekend day and night listening to this one with the headphones on, jamming out in my mind.

Much to the dismay of many fans, myself included, the group only released the single album in the 80’s. Peterson went off to do a solo project as St. Paul. The rest of the members were absorbed into Prince’s Revolution.

The Family reunited for a single charity performance in 2003. In 2007, the group announced they would be returning to the music scene with touring and new recordings. In 2011, they released a new album entitled Gaslight under the new band name of fDeluxe (which I will be reviewing in a future blog post).

The band’s website is: http://www.fdeluxe.com/
Posted by Martin Maenza at 5:24 AM