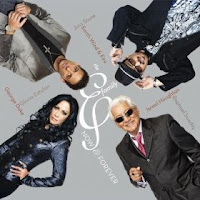 The saying goes “the family that plays together stays together”. If that’s the case, and I certainly believe it is true, the Escovedo family has nothing to worry about.

This first family of Latin-American music is led by their patriarch Pete Escovedo. Born in 1935, he and his two brothers formed the Escovedo Brothers Latin Jazz Sextet. He then worked with Santana and even led the Latin Big band Azteca. His talented children are daughter Sheila E. and sons Peter Michael Escovedo III and Juan Escovedo, all equally famous percussionists and band leaders in their own rights.


In 2011, the four united for an album called Now & Forever, a musical celebration of Latin rhythms and more. Over the course of thirteen tracks, they get a little bit of help from a number of big names in the music industry.

“Take It Back” is a smooth, salsa groove that features lead vocals by Wes Quave and Gloria Estefan. It brings to mind a warm tropical night where things heat up after a man apologizes for the way he has mistreated his woman.

Peter Michael takes the vocal lead on “I Like It”, a track with a cool R&B sound. I like the sleek rap that Sheila provides on this one as well. This is the first slower rap of hers that I can recall hearing.

“Nothing Without You” showcases Sheila’s beautiful vocals. I have always been a fan of her work from the 80's and 90's.

“The Other Half Of Me” has a number of guests on it. Co-writer of the track Joss Stone brings her wonderful voice to the lead vocals. She and the family are joined by Raphael Saadiq on bass and George Duke on piano, creating a truly soulful composition. I really like how it ends on a very soft note.

Another family member, Dominic Escovedo, takes the lead vocal duties on “Do What It Do”. This one is a very funky track that calls to me to get out of my seat and dance about the room. I predict this one will be a huge hit with club deejays.

The E Family is joined by another legendary group on “Peace And Joy”, a talented trio from Earth, Wind and Fire. Phillip Bailey provides the lead vocals, Verdine White jams on bass and Ralph Johnson delivers a timbale solo. This is another highly danceable track that brings to my mind the amazing R&B sounds of the late 70’s and early 80’s. It shows that old school is still so cool.

“Praise His Name” is an up-tempo spiritual number that reminds me of the Spanish praise services at our local Catholic church. The Latin rhythms give it a celebratory flavor that is rich and welcoming.

Pete is featured on “Nina”, a short long song that harkens back to simpler days. I enjoy the Spanish guitars on this one for they provide a simple and elegant accompaniment.

“All Around” features guest Israel Houghton, a contemporary Christian singer from California, on the lead vocals. He originally released the song in 2004 on his Dove Award winning CD Live From Another Level. The E Family put their percussion-passion into the remake.

“It’s Gonna Make You Dance” lives up to its name. With sensual a swing, hypnotic beats and seductive horns, it is very hard to resist its musical siren song.

“The J” is a short, mostly instrumental jam written by Juan.

Damon Castillo is the guest singer on “Get Out of My Way”, another smooth R&B selection that first appeared on his 2005 album Revolving Door. The version on this album, of course, puts further emphasis on the percussion as only the E Family can provide.

“Live Percussion Jam” is a title that says it all. The song is an end-to-end dance party that takes me back to the disco and funk days of the 70’s. I like how the various percussion instruments get shout-out solos on this one. It is perfect way to close out the album.

What I love about Now & Forever is the E Family puts their many combined decades of performance together to create a pleasing mix of music. This CD is like being invited to a party at their home where they and their many guests take turns on stage to entertain. It is a lot of fun. If you love Latin rhythms, you need to check this CD out.
Posted by Martin Maenza at 5:18 AM

Very nice post, funk brother - but where is the link?

Thanks for the comment, SeeNote. Of what link are you looking for? Link to the music? I don't include song samples in my reviews. Where you can buy it? Search for it on Amazon.com, iTunes or any other retailer/download sites.