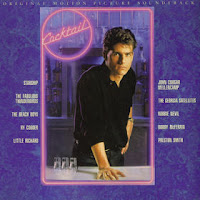 In 1988, the silver-screen was buzzing with a new Tom Cruise film that centered on bartending. Bryan Brown, Elisabeth Shue and Gina Gershon also starred in it. The film itself grossed $78 million dollars in the US box office alone. The soundtrack album was equally a success, selling over 12 million copies world-wide and reaching number 1 on the Billboard Hot 200 album charts.


Side one opens with "Wild Again" by Starship. The song also appears on the CD version of their 1989 album Love Among the Cannibals.

The Fabulous Thunderbirds are next with "Powerful Stuff", the first single from the film. The band liked the song so much that they put it on their 1989 album of the same name. With strong, driving guitars, this one is easily the hardest rocking of the tracks on this compilation.

Robbie Nevil sings "Since When", a very danceable number with a steady beat and funky bass.

One of the big hits from the film was Bobby McFerrin's "Don't Worry, Be Happy" which appeared first on his album Simple Pleasures. It was the first a cappella song to reach the number 1 spot on the US Billboard Hot 100 chart; it unseated Guns N‘ Roses‘ “Sweet Child o‘ Mine“ from the top spot and then was knocked off two weeks later by Def Leppard‘s “Love Bites“. The song also won three Grammy Awards: Song of the Year, Record of the Year, and Best Male Pop Vocal Performance. I have to admit that there was a time I got really sick of hearing this song - it was everywhere. But, with time and distance, I’ve come back around to liking it okay.

The side closes out with "Hippy Hippy Shake" by the Georgia Satellites. This song is a cover of a 1959 song by Chan Romero. At just under two minutes in length, they really work this one out with that up-tempo groove.

Side two starts with "Kokomo" by the Beach Boys. The single sold over a million copies in the US alone and went to number 1 on the Billboard charts (dethroning Phil Collin's "Groovy Kind of Love" and then losing the top spot a week later to the Escape Club's "Wild Wild West"). My wife has always been a huge fan of the Beach Boys, so this was a favorite even into the 90’s. I’ve heard it so much I can pretty much sing it by memory. I like the tropical visions it summons up.

John Cougar Mellencamp puts his own spin on the 1958 classic "Rave On!" written by Sonny West and made famous by Buddy Holly. Mellencamp’s version starts with a slow tempo and adds a festive Zydeco flavor to it.

Ry Cooder is next with a cover of the 1957 Elvis Presley song "All Shook Up". He definitely gives it a harder rock edge than the original.

Preston Smith is a blues singer/songwriter from Houston, Texas. "Oh, I Love You So" from this soundtrack is his most known recording. It has been ages since I heard this one; I had forgotten about its infectious tropical hooks. It is definitely a fun song.

The record closes out with a classic by Little Richard, his signature song "Tutti Frutti" from 1955. How can you not love those whooooh’s? The man puts passion in his piano playing and vocals.

I have to admit that I did not see Cocktail in the theatres in 1988. The people I hung out with at my apartment complex really didn't have an interest in seeing it; we were spending more of our evenings in actual bars so we didn't want to see a film about them. Still, the music was everywhere: on the radio, in the bars, on MTV. You really couldn't escape from it. Luckily the music was pretty decent overall with some great performers and good songs. I did finally see the film on HBO a few years later after I got married (my wife enjoyed the film).
Posted by Martin Maenza at 8:38 AM