Vicki Lawrence - The Night The Lights Went Out In Georgia 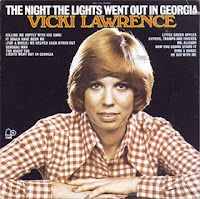 Vicki Lawrence was one of those celebrities I knew from a fairly young age. I remember fondly being over at my grandparents' house and watching the Carol Burnett Show with them when I was a kid. I am sure a lot of the humor was way over my head, but I loved the slapstick and the guests. From there, I knew that Vicki was a very attractive red head, funny and multi-talented (she won an Emmy during the show‘s 9th season in 1976). When I saw her on talk shows, she seemed to be very friendly, the type of person you'd want to know in real life. Of course, kids who grew up in the 1980's mostly would have known her from Mama's Family, which actually spun off from a reoccurring skit on Burnett's weekly variety show. And kids who grew up in the last ten or so years mostly know her for role as Miley's "mamaw" on Disney's Hannah Montana.

But back in 1973, Vicki added another notch to her entertainment belt. Though she had released two singles prior (one in 1969 and one in 1970), the Night the Lights Went Out In Georgia was the first full length album she released. And that is the focus of today's record review.


Side one starts with the title track written by her then husband singer-songwriter Bobby Russell. He really didn't like how the song turned out but Vicki recorded the original demo to "The Night The Lights Went Out In Georgia" anyway because she believed in the song. It was offered to Cher, but Sonny Bono rejected it for fear of alienating Cher's southern fans. Vicki took the song into the studio and recorded an official version. Her instincts were right, and the song eventually topped the US Billboard singles chart and spent two weeks at the number 1 spot (she bumped Roberta Flack's "Killing Me Softly with His Song" and then was dethroned by Tony Orlando and Dawn's "Tie A Yellow Ribbon Round the Ole Oak Tree").

"The Night The Lights..." is one of those songs from my childhood that I know by heart and nearly always sing along to. What I love about this song (and many of the other ones on this album) is that it is a story song. In three or so minutes, the singers give the listeners a narrative with a beginning, middle and end. If the concept of music videos had been prominent a decade earlier than the 80's, songs like this one would have made an easy transition into great, short films. This song is a tale filled with infidelity, murder, small town corruption and a twist ending.

Next up is "Mr. Allison", a song about a woman’s husband receiving love-letters from a fan at home. She suspects an affair and but welcomes the man back just the same. I’m not sure I like the implication in the lyrics that “there’s a little of you in every man”, implying that most men are cheaters. I wonder how much of this was reflective to her troubled marriage with Bobby Russell, which was falling apart at the time she was working on the record.

It is kind of ironic to see Vicki tackle Flack's signature tune "Killing Me Softly With His Song" on the album. She does a decent job with the song, keeping the vocals within her comfortable range. I realize I have at least four versions of this song in my music library, the original and three covers.

"Sensual Man" is a sweet, seductive number (as seductive as pop music got in the early 70’s, meaning it is hardly even PG rated).

"Little Green Apples" was another song written by Russell which was a 1968 hit single for O.C. Smith, a version that went to number 2 for Smith and won Russell Grammys for Song of the Year and Best Country Song in 1969. Vicki’s take is full of sunshine and warmth, with a perfect pop orchestration.

"He Did It With Me" was the second and last single from the album. It did not catch on as well as the title track, only reaching number 75 on the US Billboard Hot 100. It did play well in Canada though, reaching number 42 on the regular singles charts there and number 16 on the Canadian Adult Contemporary charts. The lyrics are sung from the viewpoint of an ex-lover, who knows every little move and tender word that the man is now using with the new woman in his life.

Side two opens with "(For Awhile) We Can Help Each Other Out", a song about good friends of the opposite sex being their for one another.

"It Could Have Been Me" is a regretful song, as the singer looks on as a man who she’s always been attracted to stands at the altar and marries another woman.

"Dime A Dance" brings back the days of dance halls where, for change, a man could dance with a pretty young woman. It definitely has that old fashioned feel to me.

Another classic story-song was "Gypsies, Tramps & Thieves", a Billboard number 1 hit for Cher in 1971. Vicki’s take lacks the power of Cher’s vocals but is pleasant enough. The song was a popular one so it wasn’t surprising to hear it done by various singers on TV variety shows.

The final track is "How You Gonna Stand It", a song about a woman finding the strength and leaving her husband alone. You can hear in her performance that this one was hitting close to home for Vicki.

As far as albums done by TV celebrities goes, the Night the Lights Went Out In Georgia is pretty good. Vicki clearly had some musical experience growing up before she became a TV star. The performances here are certainly better than the releases by the Brady Kids (trust me, I’ve heard those - some of their songs are pretty horrible) or some of those 80's actors who thought they'd give music a try.
Posted by Martin Maenza at 8:04 AM

Email ThisBlogThis!Share to TwitterShare to FacebookShare to Pinterest
Labels: 70's, music, the Night the Lights Went Out in Georgia, Vicki Lawrence

This is one talented lady. I was born in 1970, but remember "The night the lights went out in Georgia" getting ample playtime on the radio throughout the entire decade of the 70's. As a kid I would stop what I was doing to listen to the gripping story she told in that song. How many songs can do that today?

Darrin, sadly not enough songs do that today. I find a lot of today's music lacking, which is why I tend to focus more on music of the 70's and 80's on my blog. I do like when classic artists release new albums though since they tend to stay true to their musical roots that I enjoyed back in the day.