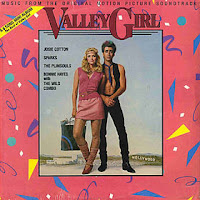 Welcome to another edition of Soundtrack Sunday. It is also the kick off of a Ladies Week on the blog when it comes to music.

In 1982, the California valley craze was sweeping the nation. Thanks to Frank Zappa’s song “Valley Girl”, which featured his fourteen year old daughter Moon Unit on vocals, everyone was sprinkling the vall-speak into their conversations. Phrases like “ohmyGod”, “barf out”, “gag me with a spoon” and way too many uses of the word “like” could be heard all across the country.


On April 29th of 1983, the box office capitalized on the trend with Valley Girl, a romantic comedy starring Nicholas Cage, Deborah Foreman, Elizabeth Daily, Cameron Dye and Joyce Heiser. The plot of the film was very loosely based on William Shakespeare’s classic Romeo and Juliet with Julia (Foreman) risking social suicide by giving up her handsome Valley dude boyfriend for a Hollywood punk named Randy (Cage).

Though the film included a number of great songs like the Plimsouls’ “A Million Miles Away” (which went to number 111 on the US Billboard 200 chart), the Payolas “Eyes of a Stranger” (which went to number 122) and Modern English’s “I Melt with You” (which only made it to number 78 on the Billboard Hot 100), none of these songs were on the original vinyl soundtrack record. Due to problems clearing rights to the songs, the actual original release of the Valley Girl soundtrack contained only six songs, with the six being repeated on both sides of the record. Despite that, the album sold well and went to number 155 on the Billboard Hot 200 Album charts.

The side opens with Bonnie Hayes and the Wild Combo’s “Girls Like Me”. The track is driven by a powerful piano base (played by Hayes) and a quick tempo groove (delivered by guitarist Paul Davis, bassist Hank Maninger and drummer Kevin Hayes). Bonnie has that perfect teen attitude to match the film’s storyline.

Next up is Sparks with “Angst In My Pants”, the title track from their 1982 album. The band first came on the scene in 1977 with their quirky lyrics and heavy synth based compositions. They were definitely one of the founders of the new wave movement.

Josie Cotton debuted “School Is In” on this soundtrack album (and performed it live in the film during the prom scene). She would later include it on her 1984 sophomore release From the Hip. The song was originally written and done by Gary U.S. Bonds; Josie gives it a nice girl-group sound with a bouncy tempo.

The Plimsouls’ “Everywhere at Once” was the title track of the band’s major label 1983 release. The track has a strong guitar sound and driving drum beat. This song definitely reflects the wild partying ways of Randy and his best friend in the film, living life to the fullest in the edgy Hollywood night spots.

Josie Cotton returns with “Johnny Are You Queer?” from her 1982 debut album Convertible Music. This song is a cult-classic to be sure. The lyrics are delivered in a straight-shooter way as a girl questions the orientation of the guy she is attracted to. Is it politically correct? No way. The 80’s weren’t about that at all. It is a fun song to dance to.

Bonnie Hayes and the Wild Combo return with “Shelly’s Boyfriend”. This one is a new-wave throwback to the early 60’s girl-band songs like “My Boyfriend’s Back”. Again, this one captures that high school vibe perfectly.

In 1994, Rhino Records released a CD version that that included the previously mentioned three tracks plus four of the six from the vinyl release in 1983 (the Bonnie Hayes songs were excluded) and the following songs too: Men At Work’s “Who Can It Be Now?”, Pat Travers’ Black Pearl and “I La La La Love You”, Josie Cotton’s “He Could Be the One”, the Psychedelic Furs’ “Love My Way”, the Flirts’ “Jukebox (Don’t Put Another Dime)”, Felony’s “the Fanatic”, Gary Myrick and the Figures with “She Talks in Stereo”, and the Plimsouls’ “Oldest Story in the World”.

I don’t remember if I saw Valley Girl in the movie theatres or not; it came out during my senior year of high school. If I didn’t catch it in the theatres, I certainly watched it many times on HBO later that year. As a fan of teen films and a lover of new-wave music, this was a perfect combination. It has been awhile since I’ve watched it, so it just might be time to break out the DVD and be transported back to my high school days.
Posted by Martin Maenza at 8:18 AM

People underestimate how much this movie shaped a lot of the speech of our generation. I find myself throwing out little bits of Valley-speak all the time! 80sMom

Kara, I totally agree with you. We who grew up in the 80's still use elements in our communications today.

This brings back memories. I remember in 6th grade, there was a girl who had a book about how to speak valley girl. I thought it was crazy then but as I've gotten older I do have a fondness for it.
70s80sSpawn

I love this stylized Romeo & Juliet love story and the music. I have the movie on DVD and will get it out this afternoon. Nicolas Cage's triangle of chest hair is somewhat disturbing, but otherwise a great flick. How awesome is Deborah Foreman?

Because of those soundtracks, I just recently purchased the Josie Cotton Convertible Music/From the Hip CD (which is hit-or-miss) and Bonnie Hayes Good Clean Fun CD (which is good clean fun, as advertised).