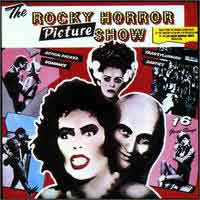 Welcome to another editon of Soundtrack Sunday.

Well, it is October and Halloween is a few weeks away. So, that means it is time for one of my favorite cult classics - the Rocky Horror Picture Show. Now, I am not one big on a scary Halloween so this film is perfect for me - lots of music, lots of sexual...tension, and lots of campy fun. The only thing scary about Rocky Horror was that episode of Glee last year when the kids tried to stage the show (I love Glee but they just didn't do the songs justice).


I've blogged about my love of the film in the past. Today I want to specifically focus on the 1975 soundtrack album from the film which was adapted from the 1973 theatre musical. This record peaked at number 49 on the Billboard 200 album charts in 1978 (three years after the film's release). It also went to number 40 and number 11 respectively on the Australian and New Zealand album charts in 1978; no surprise there since the writer of the original play Richard O'Brien grew up in New Zealand.

Side one opens with "Science Fiction/Double Feature". O'Brien's voice drips in this twisted overview of classic B-movies from the 1950's. It sets the tone nicely for this film which lovingly pays tribute to those classics while adding the elements of the 70's sexual revolution.

The couple then delivers the hauntingly beautiful "Over at the Frankenstein Place" with a little assist from O'Brien. I really like the poetic symbolism of the lyrics that he sings in the bridge.

O'Brien is joined by Patricia Quinn and Nell Campbell to do "The Time Warp", a sci-fi send up of those classic how-to dance songs from the 1960's. I remember fondly "doing the time warp" at many parties in college in the 80's. It wasn't just a Halloween favorite; it was a year-round affair. I think the whole sexual suggestiveness was appealing to intoxicated co-eds dancing the night away.

Tim Curry finally makes his dramatic entrance with "Sweet Transvestite". His enthusiasm and full-embracing of the role shines through in his vocals. This ties with the previous track for my favorites on the album.

Curry opines about the perfect specimen in "I Can Make You a Man", bringing to mind those bodybuilder ads that frequented comic books so often back in the day. This song made working out sexy many years before Olivia Newton-John did "Physical".

Newcomer Meat Loaf has only one number in the film but he tears it up. "Hot Patootie/Bless My Soul" is a rapid-fire, high energy rocker that is perfect for the singer. His performance on this track was definitely a precursor of what was to come on his own albums a few years later.

"I Can Make You a Man (Reprise)" closes out the side.

Side two begins with "Touch-A, Touch-A, Touch Me", Sarandon's solo number. She starts with a sweet tone and then is seduced by the up-tempo chorus.

Jonathan Adams has the lead on "Eddie", the story of the troubled lad that grew up to be a delivery boy and ultimately chopped hash at the hands of Dr. Frankenfurter. This one too borrows from the classic 1950's motif of early rock 'n roll.

"Rose Tint My World" is a three part suite made up of "Floor Show" (a rollicking rocker with most of the cast), "Fanfare/Don't Dream It" (a triumphant horn introduction followed by a sweet serenade by Curry), and "Wild and Untamed Thing" (an up-tempo romp).

My least favorite track on the album would have to be "Super Heroes". It appears at the end of the film, after everything has come to the climax. By this point, I am spent; the rest of the music up to this point is so much fun and over the top while this song is just sort of a slow downer. I tend to skip over it.

O'Brien delivers "Science Fiction/Double Feature (Reprise)" to bookend with the opening of side one.

The thing about the Rocky Horror Picture Show is that I knew all of the big numbers by heart long before ever actually seeing the film. I had gotten exposed to the music in 1983 during my first year in college, but it wasn't until the fall of 1984 when I actually attended my first midnight showing. It's funny too in that whenever I listen to just the songs I will, in my head, add in the audience participation shout outs as if they were a part of the original lyrics.
Posted by Martin Maenza at 8:44 AM

The mark of a good song is whether it can stand on its own, divorced from everything else (in this case, a very memorable movie). From that perspective, "I'm Going Home" is a classic - even if you aren't picturing a guy in lingerie singing it.