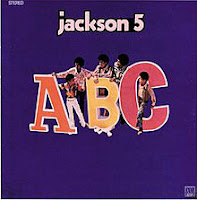 Welcome to another edition of Seventies Saturday. Today also happens to be the 53rd birthday of Tito Jackson (born in 1958), one of the musical brothers who made up the Jackson 5.

It is only fitting then to take a look at their second studio album ABC, released in 1970. The album went to number 4 on the US Billboard 200 album charts; more impressive it reached number one on the Billboard R&B album charts and stayed at that spot for an impressive twelve-week run. The record sold over 5.7 million copies worldwide.


Side one opens with "The Love You Save"; the second single from the album; it spent two weeks at number 1 on the Billboard Top 40 charts and six weeks at number 1 on the R&B singles chart. The lyrics warn a girl who moves fast in relationships to slow down before she loses the guy she loves. The Corporation, a collective of Motown writers and producers to oversee the Jackson 5, wrote this track and a few others on the album. The four members of the Corporation were Berry Gordy, Freddie Perren, Deke Richards and Alphonzo Mizell. I have always been a big fan of the energy of this song; it just begs to be danced to.

"One More Chance" is next. This one is a slower ballad. It does not do so much for me.

The title track "ABC" was the first single from the album and too went to number 1 on the Billboard Top 40 charts. It knocked the Beatle's single "Let It Be" from the top spot. The song went to number 8 in the UK. This signature song for the group takes a simple refrain that any elementary school child would know "…ABC it's easy as 123..." and builds an infectious pop hit. Moreover, the song is timeless too; I can remember being at a college event in 1986 and we all ended up dancing when this song came on (granted, we all grew up on the song as kids but still…).

"2-4-6-8" uses a childhood chant for the chorus of this mid-tempo track. It makes for a nice counterpoint to the previous track even though it treads similar ground.

"(Come 'Round Here) I'm the One You Need" was originally a song performed by the Miracles in 1966. The song's lead seeks to comfort a girl he loves even though she belongs to another man who has cheated on her. I actually think the song sounds a little too mature for Michael to sing the lead on.

Stevie Wonder first recorded “Don’t Know Why I Love You” in 1968 for his For Once in My Life album. The song has a soulful, blues feel to it. Again, I think Michael’s youthful voice does not do it the justice that it should.

Side two starts off with another Stevie Wonder track "Never Had a Dream Come True", this one coming from his 1970 album Signed, Sealed & Delivered. The brothers have pleasant backing harmonies going on their cover of the song, and I like that the other brothers share the leads here too.

"True Love Can Be Beautiful" is next. I have to admit I am not a fan of this one.

"La-La (Means I Love You)" was a hit for the Delfonics in 1968 (it went to number 4 on the Billboard charts). Now, I am a big fan of this song in general as it has an amazing melody and beautiful harmonies. However, this cover by the Jackson 5 is a thumbs-down as the lead vocal just does not do it for me.

George Clinton and Funkadelic first recorded "I'll Bet You" on their debut album in 1970. The song has a slow, funky groove to it, and it allows each of the brothers a chance at lines in the vocals.

Brother Jermaine takes the leads from Michael on the track "I Found That Girl". I applaud the change up as it provides a bit more variety to the album. Jermaine has a tone in his voice that reminds me a bit of a young Smokey Robinson.

"The Young Folks" was a song originally recorded by the Supremes in 1969 for their album Cream of the Crop. This one is an anthem for the youth generation who are looking to change the world for the better. I think this one is a fitting track for this young band to perform as they were calling to a new generation kids of the 70’s.

One thing I always find so interesting about albums from the 1970's (and even the 1960's) is how often you will encounter the artists covering earlier songs. ABC is a good example with half of the album being covers by other artists, occasionally from artists that are not on the same label. Interesting too was that two of the six covers here has just been released a few months prior in 1970. That is something you would be very unlikely to see today. Back in the day, things were a lot more relaxed and collaborative rather than controlled and competitive. Sometimes the covers work and sometimes they don't, which this album illustrates.

I was exposed to some of these songs on the radio in 1970, but I would experience more of them come the fall of 1971 when the Jackson 5 cartoon show (produced by Rankin-Bass) appeared on the ABC network. Most of this album's content appeared in some form or another in the first season's episodes. It was really a brilliant marketing move on Motown's part to find a way to get the Jackson 5's music to an even younger audience.
Posted by Martin Maenza at 6:50 AM