ZZ Top - A Tribute From Friends 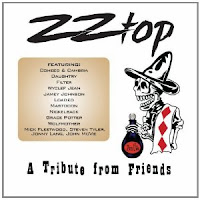 Welcome to a week which will focus on a number of new music releases here on the blog.

The hard-rocking trio from Texas has been together since 1969, mixing blues and boogie rock into the tapestry of the American rock archives. They have sold more than 50 million albums world-wide, half of which in the US alone. They’ve scored eight Top 40 hits and six number 1 hits on the Mainstream Rock charts. In 2004 they were inducted into the Rock and Roll Hall of Fame. It is only fitting, then, that eleven musical acts come together for a CD to celebrate the career of ZZ Top on ZZ Top - A Tribute From Friends which came out this month.


The album kicks off with a super-group called M.O.B. featuring Mick Fleetwood, John McVie, Jonny Lang and Steven Tyler. This quartet suits up a version of “Sharp Dressed Man”. Tyler’s vocals are their wonderful down-and-dirty best. Fleetwood’s drumming is a bit relaxed, not as hard-driving as I would have preferred. Lang and McVie serve up strong guitars but they aren’t as searing as the Texans typically do on this number.

Filter is next with “Gimmie All Your Lovin’”. They’re an industrial rock band that debuted in the 90’s, one with which I am not very familiar. Their twist on this song is very different, dark and gothic. While this isn’t my type of music, it sort of works for me.

Grace Potter and the Nocturnals, an American folk-blues rock band from Vermont, try their hand at “Tush”. Again, this is another newer band (they made their debut in 2005) to me, but I was very impressed with how they capture the ZZ sense in their rendition. It is kind of interesting hearing this one sung by a woman lead; it sets up a predatory female spin to the song that I find appealing.

Now, Nickelback is a band I know; I have a few tracks by them in my music library. They take a run at the classic “Legs”. Their spin is a lot harder edged than I would normally associate to their music. It seems to do the song justice though.

Wolfmother is a band that I got to know thanks to playing Guitar Hero with my son. They try on some “Cheap Sunglasses”, doing a spot on version is this too-cool-for-school song. I like their rendition quite a bit. Everything works: the vocals, the music interpretations, and the attitude.

Next up is someone I know from his time with Guns ‘N Roses. Duff McKagan’s Loaded presents “Got Me Under Pressure”. McKagan’s guitar playing and vocals does this classic proper, and the drums by Isaac Carpenter keep everything moving at just the right clip.

Coheed and Cambria is a progressive rock band formed in the mid-90’s. They keep their version of “Beer Drinkers and Hellraisers” right down the middle of the road, not at all overly metal.

Mastodon is a heavy metal band from Atlanta, Georgia, that formed just before the turn of the century. They perform the track “Just Got Paid”; I like the guitar solos in the middle of this one.

Wyclef Jean, the Haitian musician who became famous with the group the Fugees in the 90’s, gives us his version of “Rough Boy”. This track is quite a bit more laid back than the original with a bit of an island swing to it as well.

American Idol alumni Daughtry does a combo with “Waitin’ for the Bus / Jesus Just Left Chicago”. Chris and his band respectfully cover this material with little variance from the originals. They put a good bit of the blues into the later track on this mix.

Jamey Johnson, a country guitarist from Alabama who made his recording debut in 2005, closes out the record with “La Grange”. Johnson and his band have every nuance of this classic track down pat, from the guttural vocals to the famous guitar riffs. I do like the prominent keyboards that can be heard on this one. They are a nice touch.

I’ve been a fan of ZZ Top since my high school days. I really loved what they did with music videos in the early days of MTV, and I got to appreciate their earlier work from the local album-oriented rock stations. Clearly they inspired a number of musicians over the years, some of whom appear on this compilation. I got a lot out of this one, especially hearing for the first time a number of bands that were new to me.
Posted by Martin Maenza at 5:27 AM