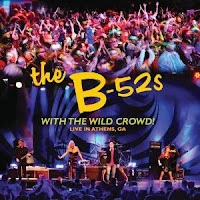 Happy birthday to Keith Strickland of the B-52's, born on this day (October 26th) back in 1953. To celebrate, I'll review the first ever live compilation from the B-52’s, released earlier this month.

In February of 2011, to celebrate the 34th anniversary of their first ever live show, the quartet (Kate Pierson, Fred Schneider, Keith Strickland and Cindy Wilson) returned to their hometown to make this recording - With the Wild Crowd! (Live in Athens, GA)


The B-52’s have always been a party band, and this CD is a non-stop dance party. I have never seen them in concert, but this recording clearly shows that they are fantastic live. Some bands sound great in the studio but pale when you hear them live. Not so with the B-52’s. Everything you would expect from their sound is here with no signs of aging or slowing down.

For me, the tracks chosen for the show are a good mix.

Things get off to a great start with a rousing version of “Pump” from their 2008 album Funplex. This is the first time I’ve heard this song, and I think it is awesome. Later on we also get “Ultraviolet“, “Love In the Year 3000“, “Hot Corner“ and “Funplex” from that release. After hearing these five songs, I definitely have another album to seek out.

But this album is more than just a reflection of their last studio album. This is a celebration of their career as a band!

So, of course, we have to go back to the beginning and their 1979 self-titled debut the B-52’s. We get “52 Girls” halfway through the show and, to close the concert out, “Planet Claire” and “Rock Lobster”. We also pay a revisit to 1980‘s Wild Planet for “Private Idaho”, “Give Me Back My Man“, and “Party Out of Bounds“.

From 1982, the title track of the EP Mesopotamia is here. From 1983’s Whammy! they serve up “Whammy Kiss”. 1986’s Bouncing Off the Satellites is represented by “Wig”. From their 1989 best seller Cosmic Thing we are treated to “Roam”, “Cosmic Thing” and “Love Shack”.

If you are a fan of classic new-wave/alternative music or really enjoy the quirky songs of the B-52’s, this is a must-get CD.
Posted by Martin Maenza at 5:20 AM

Email ThisBlogThis!Share to TwitterShare to FacebookShare to Pinterest
Labels: 80's, live, music, the B-52's, With The Wild Crowd

One of their best songs isn't a party song - "She Brakes for Rainbows." I had always assumed that the song was written after Ricky Wilson's death, but it actually appears on the last album in which he appeared.

And "Mesopotamia" would be a song for a very odd party, but what do you expect when you invite David Byrne?