Duran Duran - All You Need Is Now 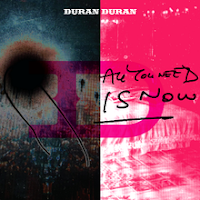 In late December of 2010, Duran Duran released a truncated version of this album on their own label Tapemodern and Allido Records (the label managed by Mark Ronson who also produced the album). In the US, the full length version was released in March of 2011 on the S-Curve Records label, distributed by Universal, and coincided with the 30th anniversary of the band’s first studio release. Currently, the band is out on tour to promote All You Need Is Now.


The record has been doing very well on the charts. In their native UK, the record has gotten up to number 11. In Italy, it reached number 10. In the US, the album went to number 29 on the Billboard 200 and number 7 on the Rock Albums chart. Critically, it has received rave reviews and is often likened to their mega-hit album Rio (click here for my review of that release).

The record starts out with the title track. “All You Need Is Now” was the first single from the record, available in December of 2010. It peaked at number 38 on the US Billboard Adult Pop Songs chart. The song has an industrial dance sound to it, thanks to the slight distortion on Le Bon’s vocals and the heavy synth sound of Nick Rhodes’ keyboards. It definitely shows that the guys still have their finger on the pulse of current music, allowing them to adapt their style to more modern elements. It is a very danceable track.

“Blame the Machines” has a driving beat by Roger Taylor on drums that instantly brings to mind the classic days of the band in the early 80’s. The song is very much new-wave for a new age. Nina Hossain, a British journalist and newscaster, delivers the spoken word portions on this track.

“Being Followed” continues that classic 80’s flavor. I like John Taylor’s guitar on this one. The whole thing has an urgent, paranoid mood to it which is punctuated by the sirens at the end.

“Leave a Light On” was released as a UK-only single. Ronson joins in on guitar on this slower, ethereal track.

It is time to kick the tempo back up with a funky dance groove. “Safe (In the Heat of the Moment)” features vocals and rap by Ana Matronic, the female lead singer for the Scissor Sisters. She also co-wrote the track with the band. This one brings to mind the Duran Duran tracks that Nile Rodgers did with the band on 1986’s Notorious album.

“Girl Panic!” was the second single from the album, released in April 2011. BBC Radio 2 in the UK apparently refused to play the single. It too has a funky groove to it that I enjoy.

“A Diamond In the Mind” features the wonderful strings of the St. Kitts String Octet. They are haunting and beautiful. I kind of wish the track was a bit longer than a minute and twenty seconds. It felt like a tease for something bigger.

“The Man Who Stole a Leopard” features Kelis Rogers, a twice nominated Grammy singer. The beginning of this song reminds me a lot of “the Chauffer” in tempo and musical elements, but then it changes up pleasantly. Hossain is back with a newscast narrative on this one.

The more modern, industrial sound is back on the opening of “Other People’s Lives”. This is another very danceable track with a breakneck rhythm.

“Mediterranea” has a wonderful sway to it, like waves in the ocean. It is almost hypnotic.

“Too Bad You’re So Beautiful” is a sexy song. I like the lyrics about unrequited love.

“Runway Runaway” is next. It is very tight and concise. It has the makings of a good single with its catchy rhythm and rich vocal harmonies. I like the title too.

“Return to Now” is another short, instrumental track that I would have liked to have been longer. I enjoy the deep, rich strings and orchestration.

The album closes out with “Before the Rain” with a moody track. There are some amazing sounds on this one, very multi-layered and complex. It requires multiple listens to pick the various elements out.

All You Need Is Now has been on my must-get list for a few months now, but other things came up. Still, the many Duran Duran fans that I follow on Twitter have all sung its praises; so I knew even before I heard the first notes that there was a good chance I would enjoy the album. And they were right.

This is wonderful record that harkens back to the 80’s music from the band that I listened to while still in high school. Clearly the guys have still got it and know how to tap into that vibe that made them beloved by so many the world over thirty years ago. My only regret is that it took me this long to get the record; I am certain it will find its way into the regular rotation on my iPod.
Posted by Martin Maenza at 5:19 AM

Nice review. I'm definately going to have to check this out.

Like all of you when I heard the original lineup had reunited for "Astronaut" I was thrilled.
Not quite so thrilled when I heard the disc.
Granted "Astronaut" had some great moments but that was not the comeback I was hoping for.
I skipped "Red Carpet" all together due to the reviews from fans and critics.
Then without even realizing DD was coming out with something new, this caught my attention on our local newspaper.
Not quite the hippest place to find out about a new DD album but that's it.