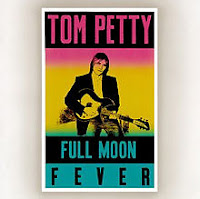 In 1989, the Florida born musician recorded his first solo album Full Moon Fever. He did, however, get a little help from some of his band the Heartbreakers (Mike Campbell and Benmont Tench) as well as his fellow Traveling Wilburys (Jeff Lynne who co-wrote and co-produced most of the songs with Petty, George Harrison and Roy Orbison). The record went to number 3 on the Billboard 200 album charts and has been certified Platinum many times over in its first decade of release. The album was ranked number 92 in Rolling Stone's Top 100 Albums of the 80's list.


Side one starts with “Free Fallin’”, the third single from the album. It reached number 7 on the Billboard Hot 100 and number 1 on the Mainstream Rock Tracks chart. I love how it opens simply with just Petty and his guitar, and then later gets bigger. It sets the tone nicely. This coming-of-age song contains a number of references to Los Angeles and the surrounding areas (Reseda, the San Fernando Valley, Ventura Boulevard, and Mulholland Drive). Whenever this one comes on the radio, I find myself singing right along with Petty; it is a very beautiful song.

The first single, “I Won’t Back Down”, went to number 12 on the Billboard Hot 100 and spent five weeks at number 1 on the Mainstream Rock Tracks chart. The lyrics of this mid-tempo track deliver a firm stance against those who attempt to overrule or oppress others.

I really like the extended keyboards opening on “Love Is a Long Road” followed by the guitars. It almost feels a little like the Who. This song shares a lot of attributes with songs that Petty did with the Heartbreakers; no surprise since he co-wrote it with Campbell.

“A Face in the Crowd”, the fourth single, fell short of the Top 40 as it peaked at number 46 on the Billboard charts. The lyrics tell of a performer falling in love with someone who used to be just a face in the crowd at a concert.

“Runnin’ Down a Dream”, the second single, also went to number 1 on the Mainstream Rock Tracks chart; it went to number 23 on the Billboard Hot 100. The breakneck tempo on this one makes it a late 80’s favorite of mine; it is a perfect tune for driving on the open road with the windows down and the music cranked up. The reference to Del Shannon and his 1961 hit “Runaway” is a nice touch.

Side two begins with “I’ll Feel a Whole Lot Better”, a cover of a song from the Byrds’ 1965 album Mr. Tambourine Man. The lyrics are a bitter view of romance, implying that the singer’s life will vastly improve when the other person is out of his life for good.

“Yer So Bad” has a rockabilly tempo to it that is very catchy. The lyrics are ironic in that the person that is so bad is actually the best thing the singer ever had.

“Depending on You” has an underlying frustration as the singer cannot understand why the woman he loves is so insistent on making radical changes in her life. He relies on her being consistent and there for him.

“The Apartment Song” reflects with some relief and some loneliness too upon the past, living in a small two-room place and being in a particular relationship.

“Alright for Now” has a pleasing sound to it thanks to Petty on the acoustic guitar and Campbell on the mandolin. It is very much a sweet lullaby.

I like the up-tempo pace of “A Mind with a Heart of Its Own”. The pause at the two minute forty-three second mark is deceptive; it isn’t over until Petty says it’s over.

“Zombie Zoo” closes out the album.

Full Moon Fever is a very strong rock ‘n roll record. Petty and Lynne use their many years in the business to craft a wonderful record without a bad track in sight. I enjoy it quite a bit.
Posted by Martin Maenza at 5:19 AM