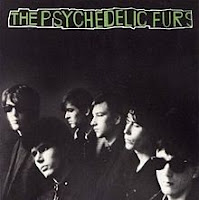 In 1980, the sextet of musicians out of England released its first studio album, the appropriately self-titled The Psychedelic Furs. The record performed fairly well, reaching number 18 on the native UK charts; in the US the record made it to number 140 on the Billboard 200 album charts. For this review, I am posting the US album cover and that track listing.

Side one opens with “India”, an over six minute track with a low-key, moody start. After two minutes, it explodes into a high energy rocking beat thanks to Vince Ely on drums and John Ashton, Roger Morris and Tim Butler on guitars. I like the power behind this one as the band shows it is here to rock.

“Sister Europe” pulls the tempo back, allowing Duncan Kilburn’s saxophone to set the haunting tone. Richard Butler adds to that with his low-range, intense vocal approach. The song creeps into your head and spreads out for the long haul. The lyrics are full of sadness over a girl-friend who is moving away.

“Susan’s Strange” is next. It takes pop elements and gives them a new twist for a new decade.

“Fall” reminds me a bit of the early Clash and its punk roots, but the saxophone again punctuates all that nicely. The lyrics are delivered in a ratta-tat-tat style that matches the drum beats.

“We Love You” is a list type of song, stating various things that the singer is in love with (Frank Sinatra, the Supremes, Sophia Loren and more). But the lyrics take a bit of a sarcastic tone as the song goes on, almost making a mockery of the phrase “I love…”.

Side two begins with “Soap Commercial”, a song that clearly makes sport of the idyllic imagery presented in advertisements. I really like how the band gets to work out the song with some instrumental sections on this one.

Next up is “Imitation of Christ”. The song projects religious imagery over the drama of someone in a relationship.

“Pulse” picks the pace up once more with a great beat to dance to. It reminds me a little bit of the Go-Go’s “We Got the Beat” rhythmically.

“Wedding Song” has a steady tempo with the guitars and saxophone almost giving it an Eastern flavor. The lyrics trash what the singer sees as “useless” pageantry that has been added to the modern day marriage ceremony and celebrations.

“Flowers” closes out the record with another up-tempo beat that is very similar to earlier tracks. The lyrics are full of that youthful rebellious attitude. The song ends with a cacophony all its own, further showing the band’s punk side.

As a fan of the band’s mid to late 80’s offerings, it was enlightening to go back and dive into their debut on the Psychedelic Furs. It helped me to understand where they started and the foundations of later aspects in to their music. As someone who enjoys the 80’s alternative sound, I found this to be a pretty good debut.
Posted by Martin Maenza at 5:18 AM