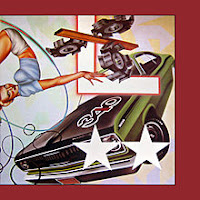 This review of the Cars fifth studio release, from March 13th of 1984, is by request from some of my followers on Twitter.

Heartbeat City benefited from radio airplay of a number of hits as well as music videos in heavy rotation on MTV. As a result, the album went to number 3 on the US Billboard 200 charts and was certified multi-platinum; in the UK it went to number 25 on the charts.


Side one greets us with "Hello Again". As the fifth single from the album, it went to number 20 on the US Billboard Hot 100 chart and number 22 on the Mainstream Rock Tracks chart. I like the combination of synthesizers and keyboards on this one; they bounce around in an erratic way that borders on a crazed stalking behavior.

"Looking for Love" has a slower shuffle to it for the most part, save for a few more up-tempo bursts with the chorus and bridge. The lyrics describe an emotional longing.

The third single, "Magic", went to number 12 on the Billboard Hot 100. For some reason, this song makes me think of a carnival or an amusement park. It has an upbeat, almost calliope movement to it.

"Drive", the fourth single, was also the best charting from the record. It went to number 3 on the Billboard Hot 100, number 9 on the Mainstream Rock Tracks chart, and number 1 on the Adult Contemporary Tracks chart. This is the first of three tracks on the album where bassist Benjamin Orr takes over the lead vocal duties normally done by Ric Ocasek. This song has such a soothing quality to it thanks to the slower drumbeats and hypnotic synthesizer lines. The lyrics also make me a little sad, thinking about the failed relationship in the song.

Orr performs the lead vocals on the next track "Stranger Eyes" as well. This one has a mysterious aura to it, dangerous yet so alluring.

Side two opens with "You Might Think", the debut single from the album which went to number 7 on the Billboard Hot 100 chart. This is one of those songs I know so well from hearing it so many times over the past few decades. If it comes on the radio, I find myself singing right along with Ocasek.

"It's Not the Night", the second single, managed to get to number 31 on the Mainstream Rock Tracks chart. This is also a track that Orr does the leads on. The cascading synthesizers create a nice effect here; they really make the track for me. This one is definitely my favorite of the deeper, non-single tracks from the album.

"Why Can't I Have You", the sixth and final single, hit the charts in 1985 where it reached number 33 on the Billboard Hot 100 and number 11 on the Mainstream Rock Tracks chart. Ocasek’s vocals here give that perfectly obsessive voyeur feel.

"I Refuse", with its strong new wave elements, is next.

The title track closes out the side and the album. "Heartbeat City" has a sci-fi feel to it as if it were the theme of some avant-garde hi-tech haven for the lonely.

I was in my first years of college when Heartbeat City was released and remember fondly how popular the tracks were from this record. I would hear these songs by the Cars blasting from dorm windows and radios, or when I was out for the evening at floor parties on campus or in bars about town.
Posted by Martin Maenza at 5:27 AM

Love this album and saw them on tour for this one on Sept. 2, 1984. Wang Chung was opening act.

"Drive" is the weak track for me, a somnolent song that everyone loves more than I do.

"Hello Again" was always a good album opener and a solid way to start a mixtape 30 years ago. I think it would be cool to hear a modern EDM artist cover this one, updating the technology. The 12" single has the 3:47 album version on one side and the 5:54 remix and 6:02 dub version on the other.(Still have it and the album on Vinyl Wall.)

Probably more so that any other album or artist, I remember the videos made for the songs from this album - they always seemed to be playing when I caught a glimpse of MTV or Friday Night Videos.