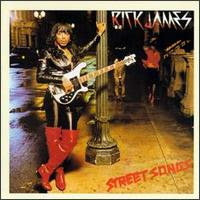 On April 7th of 1981, Buffalo, NY, native Rick James released his fifth studio album. Street Songs was certified Platinum in the US, reaching number 3 on the Billboard Album charts and number 1 on the R&B Album charts. Three singles were released from the record, all of which went to number 1 on the US Dance Singles chart.


Side one opens with the single “Give It To Me Baby”; this song went to number 40 on US Billboard charts, number 1 on the US R&B (for five weeks), and number 47 in the UK. The song has an unforgettable funk opening riff that is the foundation for the rest of the track. This was a dance favorite in the clubs for a number of years after its release; I remember dancing to it in bars well into the mid-80’s when I was in college. It was clearly a deejay favorite in many parts of New York State long after it had left the charts.

“Ghetto Life”, the album’s third single only went to number 102 on Billboard charts and number 38 on R&B charts. Once more, Rick lays down a very funky groove for this semi-autobiographical tune. The lyrics tell about his growing up in the ghetto in the 1970’s.

Things slow down a tad with the mid-tempo “Make Love to Me”. Rick gets down and dirty on this one as the saxophone plays its siren song along with the rest of the orchestration. He doesn’t waste any time masking his intent with symbolism; Rick lays it all out on the table in straight-forward language.

“Mr. Policeman” brings in an organ to go with the funky guitars on this one. The lyrics tell of a corrupt cop in the neighborhood who would rather shoot first and ask questions later.

Side two kicks off with “Super Freak (Part 1)”, his best selling Billboard chart single (reaching number 16); it also went to number 3 on R&B charts. Fellow Motown label-mates the Temptations provide backing vocals on this one. Rolling Stone magazine has ranked this signature tune at number 477 on its list of the 500 Greatest Songs of All Time. The infectious rhythm, which MC Hammer sampled late in the decade for his hit “You Can’t Touch This”, is impossible for me to resist dancing to. This one was always a favorite at parties and clubs; we would all dance and sing along to the chorus. Certainly not the kind of song we would want to listen to at home with our mothers, thanks to its suggestive lyrics.

“Fire and Desire”, the longest track on the album at seven minutes and seventeen seconds, is another smoking hot duet with Teena Marie. The song is a wonderful slow jam, especially given Teena’s amazing vocals. She seems to challenge Rick to raise his game which makes them the perfect duet partners.

The tempo kicks back into party mode with “Call Me Up”. I like how the rhythm changes up between the verses and the chorus, just enough to keep you attentive. This one would perfectly mix with the first track on the album as they share similar bass lines and horn bursts.

“Below the Funk (Pass the J)” closes the record with a quick tempo groove. The song is obvious with its drug references (Rick’s love of marijuana was no secret) as the funk master waxes poetically about growing up in Buffalo, NY.

As a sixteen year old at the time of the release of Street Songs, most of my initial exposure to this album was via the singles as they appeared on radio and television countdown shows. As I got older and started to go out to party in bars and clubs, I would hear more of these tracks. Given that I grew up forty minutes south of Buffalo and went to college about an hour north of the “Nickel City“, I was always well within the radius of the heart of “Rick James country”. Clearly the western New York deejays felt good about playing the tunes of a local celebrity. Not that I was complaining. These songs all have a fantastic groove to them to dance to.
Posted by Martin Maenza at 5:32 AM