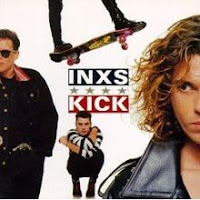 The sixth studio album and final release in the 1980’s for the Australian band INXS was 1987’s Kick. It was the second album from the band to go to number 1 in their native Australia. In the US the album went to number 3 and in the UK it went to number 9; in both countries it was certified Platinum a number of times over.

Side one starts with the funk and grunts of “Guns in the Sky”. The percussion by Jon Farriss is a simple but effective pattern.


The third single from the album, “New Sensation”, went to number 3 in the US, number 25 in the UK and number 9 in Australia. I really like the repeating guitar riffs from the Farriss brothers (Andrew and Tim) on this one; they get into your brain and rattle around there for hours on end. I’ve heard this song so much that I inevitably sing along to it whenever it pops on the radio. And it is a fun song to dance to as well.

“Devil Inside”, the second single, went to number 2 in the US (it was denied the top honor by Whitney Houston‘s “Where Do Broken Hearts Go“), number 6 in Australia and number 47 in the UK. This one has another great opening guitar riff. I enjoy how Michael Hutchence starts the vocals at a lower almost whisper for the first verse before opening it up.

“Need You Tonight” was the album’s first single and the only one to go to number 1 on the US Billboard charts; it dethroned Michael Jackson‘s “The Way You Make Me Feel“ and was then knocked out after one week by Tiffany‘s “Could‘ve Been“. The song went to number 2 in the UK and number 16 in Australia. The song has a very sexy quality to it, from the lyrics to the guitar call-and-answer to the vocals. That quality came out whenever we danced to this one in the clubs back in the day.

That song then segues into “Mediate”, a stream-of-conscious type of song where each line ends with a rhyme to the word “ate”. Kirk Pengilly has a sweet saxophone solo on this track. The video of “Need You Tonight” included “Mediate” with the later half being done in a style similar to Bob Dylan’s “Subterranean Homesick Blues”.

“The Loved One” was a 1966 R&B song by the Australian band called the Loved Ones; it went to number 2 in their native country. INXS recorded a cover of the song for this album, giving it a nice rocking swagger and plenty of attitude.

The second side opens with “Wild Life”. This song has another driving, danceable beat to it. The band was clearly going for songs to party to and this one certainly qualifies. I really like all the layers to it.

“Never Tear Us Apart” went to number 7 on the US Billboard Hot 100 charts, number 24 in the UK and number 14 in Australia. This song has such a beautiful orchestration to it, and I like how they incorporated a nice dramatic pause right at the end of the first verse at the forty-eight second mark. This is another of the songs from this album that I know so well that I end up singing along to when it comes on (it came on earlier this week on the radio and I did just that). It is definitely my favorite track from the entire record.

The fifth and final single from the album was “Mystify”; it went to number 14 on the UK singles charts and number 5 in Canada. Andrew Farriss plays some wonderful keyboards for the foundation of this one.

The title track “Kick” is so full of energy that it explodes right out of the gate. I love how the song delivers a message of persistence, that in life you have to keep on going no matter what. Pengilly punctuates it with more of his saxophone playing.

“Calling All Nations” keeps the tempo going with another very danceable track. The song has a positive message of unity to it.

“Tiny Daggers” is my second favorite track from the album. This lesser played deep track has a great rhythm to it. It is a great way to close out a record full of good songs.

I had been a fan of INXS for most of college years; their songs were perfect for playing at floor parties and such. When Kick came out, it was huge for all of 1988 between airplay, MTV exposure and clubs. You really couldn’t get away from the music, so it was a good thing that the album was so listenable. I was fan back then and still am to this day, twenty three years later. The album is solid from beginning to end; every track is well done. It is definitely one of my favorite rock albums from the later half of the 80’s decade.
Posted by Martin Maenza at 5:21 AM

What a great album this was and continues to be. Every track is a keeper, and even today it really holds up well.

I remember blasting this album one hot summer in my first car. Good times.

I went on to explore quite a bit of the INXS body of work, and sadly due to the grunge explosion of the early 90's, many people missed out on "Welcome to Wherever You Are", another great release from the band.

I agree - lots of great stuff in their catalog. I have the Welcome to Wherever You Are album digitally too. I'll likely visit that one in the future at some point for the blog.

Thanks for reading and posting your thoughts. I appreciate them.