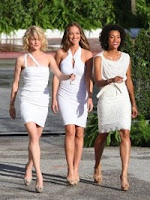 This past week, the ABC network debuted a new series with a very familiar name - Charlie’s Angels. The new series stars Annie Ilonzeh (Kate), Minka Kelly (Eve), Rachael Taylor (Abby), Ramon Rodriguez (Bosley) and Victor Garber (as the voice of Charlie). The three women and Bosley work for a boss they've never met at the Townsend Detective agency. Sounds familiar? It should.

But this is not your father's Charlie's Angels.


I should know. I am a father of a teenaged son. But back in 1976, I was (almost) a teenager myself. And that's when the original Charlie's Angels debut (also on the ABC network and it debuted on September 22nd which is also the date the newest show debuted, thirty five years later - how appropriate).

Back then, the three "little girls" were former Los Angeles police women who were stuck doing safe, precinct jobs. Charlie took them away from all that and put them on cases where they could make a difference. There was Kate Jackson (Sabrina), Farrah Fawcett-Majors (Jill), and Jaclyn Smith (Kelly) - and in later seasons others came on board to round out the trio: Cheryl Ladd (Kris), Shelley Hack (Tiffany), and Tanya Roberts (Julie). The only two characters that overlap between then and now are John Bosely (played by David Doyle) and Charlie Townsend (voiced by John Forsythe).

The new show takes place in Miami, a nice locale that gives sun, fun, big city, splashy ocean and of course big crime. This first episode of the 2011 show wastes no time getting into all that. "Angel with a Broken Wing" opens up with the agency rescuing a kidnapped teenager from a wealthy scumbag. The girl is saved yet the scumbag gets off, so the ladies celebrate a partial victory - that is until tragedy strikes. That's in the first ten minutes. Way to start off with a bang, literally.

Being biased having grown up with the original (I had pictures of the original actresses plastered on my bedroom walls during my early teen days), I was skeptical going into viewing this first episode. Could it live up to my adolescent memories (and the first season DVD set I have in the basement)? Turns out, I shouldn’t have worried too much. Drew Barrymore is serving as one of the show’s executive producers, and her love of and involvement with the Angels franchise is quite well known. She co-produced and co-starred in both the 2000 Charlie’s Angels film and its 2003 sequel Charlie’s Angels: Full Throttle. So, clearly the show was in caring hands.

Back to this first episode, all in all it was okay for me. I’m lukewarm with the idea that these “angels” are hardly “saintly” (each has a bit of a criminal past and only one was a former cop, albeit a bit of a corrupt one). Even Bosley, a suave and charming computer hacker who is a bit of a modern day Robin Hood (dude hacked the IRS for crying out loud) and has a weakness when it comes to the ladies, is a bit of a gray area character. I guess it makes it more interesting if the good guys weren’t always so good; it definitely puts them into a more vigilante sort of role. I do like the way modern day tech is involved in the show: mentions of Twitter feeds and the use of iPad-like tablet computers for accessing surveillance equipment and sharing information work for me.

Will I watch the show regularly? Folks who know me know my Thursday 8pm live viewing belongs to the Big Bang Theory. However, thanks to the modern technology and the ABC app on my iPad, I will certainly check out the newest episodes while I’m working out on the weekends on the treadmill. This way, I’m killing two birds with one stone and the forty-seven minutes for the show won’t feel like I am wasting time.
Posted by Martin Maenza at 5:33 AM