Queen - A Night at the Opera 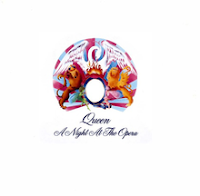 This past week would have marked the sixty-fifth birthday of Queen’s amazing, energetic, charismatic and matchless front-man Freddie Mercury. As such, I thought it was only fitting that I do a review of one of his band’s albums, their fourth studio release from 1975 A Night at the Opera.

Taking its name from the classic Marx Brothers comedy film from 1935, the album was a commercial success; it has been certified multi-platinum and went to number 1 in the UK and number 4 in the US. A Night at the Opera is also recognized on a number of critical lists. The BBC ranked it at number 9 on its poll of the Top 100 Albums. Q magazine ranked it number 17 on the list of the 50 Best British Albums Ever. Rolling Stone magazine ranked it number 230 on its list of the 500 Greatest Albums of All-Time.

Side one opens with the beautiful piano chords of “Death on Two Legs (Dedicated to…)”. The song then picks up with the lyrics, full of anger and debasement (it is believed that Mercury directed it all towards their former manager Norman Sheffield). When I first heard this as a ten-year old in 1975 I was floored that they could put such sentiments into a song (especially “now you can kiss…my ass goodbye”). Great stuff.

“Lazing on a Sunday Afternoon”, by contrast, has a more playful rag-time sound. It has an old-fashioned feel to it that I rather enjoy.

Time for another change up with “I’m in Love with My Car”, a hard rocking number that was inspired by one of the band’s roadies’ Triumph TR4, a 1960’s roadster. It ends with a revving engine.

“You’re My Best Friend” was the second single released from the album; it went to number 7 in the UK, number 3 in Ireland and number 16 in the US. The song, which features a Wurlitzer electric piano that gives the song its classic sound, is a straight forward love song written by John Dean for his wife Veronica. It is one I’ve heard quite often over the past decades, one which I enjoy singing along to.

“39” has a science fiction slant to it as a group of space travelers return home only to find that a hundred years have passed. I really like the acoustic feel to this one and the harmonies on the chorus.

“Sweet Lady”, by contrast, is a much harder driven rock number with a heavy guitar riff that is a classic signature of Brian May. By the end, the tempo kicks into a wild storm.

“Seaside Rendezvous” returns back to the rag-time sound from earlier, with Mercury on the piano and Roger Taylor on a number of brass instruments. I enjoy Mercury’s falsetto vocals.

Side two begins with “The Prophet’s Song”, an epic eight minute tune that has its conceptual roots in the Bible with the story of Noah and the Great Flood. I really like the dark mood that the music sets. The echoing effects of the vocals in the center are also very cool.

Mercury wrote “Love of My Life”, a beautiful piano ballad, for his girlfriend at the time Mary Austin.

“Good Company”, a May composition, features a Hawaiian ukulele as the main instrument. The lyrics tell the tale of a man given advice by his father, but after a life of ups and downs the man realizes that everyone in life comes and goes. He concludes the only true constant is one’s self. Sadly, he has no one to impart this wisdom to.

The album‘s first single, and arguably most famous track, is “Bohemian Rhapsody”. The song went to number 1 in a number of countries including the UK; in the US it spent seventeen weeks on the charts and went to number 9. It appeared again on the US Billboard charts and went to number 2 in 1982 after being featured prominently in the comedy film Wayne’s World. This is my favorite from the record, a track I know very well; I sing along to it as it goes from musical phase to musical phase. I enjoy listening to it with headphones on as the parts bounce from speaker to speaker. It is definitely one of the classic epic rock songs of all-time.

To close out the album, May arranged a version of the anthem “God Save the Queen”.

As I mentioned earlier, I was ten years old when Queen’s A Night at the Opera came out; I was still in elementary school at the time (halfway through 5th grade). Luckily I had an older brother who was entering high school and thus was exposed directly to this album through him.

Listening to the record again for this review after a long time, there were definitely some old favorites and a few tracks that I’d almost forgotten about. Looking at it all together, this album definitely has two distinct personalities: the hard-rocking side and a more playful, old-time side. For the most part, I think this mix works out pretty well. It has a little something for both camps. I definitely don’t get bored listening to it.
Posted by Martin Maenza at 6:55 AM

Email ThisBlogThis!Share to TwitterShare to FacebookShare to Pinterest
Labels: 70's, A Night at the Opera, Brian May, Freddie Mercury, music, Queen