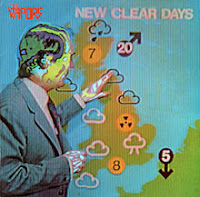 Coming from Guidford, Surrey, the four member England new wave band the Vapors made their recording debut in 1980. The album title New Clear Days included the play on words for “nuclear”, given that concern over nuclear weapons and power stations was a major headline at the time.

For this review, I’ll be focusing on the track listing of US and Canada release. The UK release changed up the order of some of the tracks and included two different tracks.

Side one opens with the band’s most known song “Turning Japanese”. This single went to number 3 in the UK, number 7 in Canada, and number 36 in the US. The main guitar chords are done in an Oriental riff, and the lyrics tell of a young man’s obsession with taking pictures of his girl friend. I like that my son and I can play this one on Rock Band; it is a song I’ve heard so many times that I can sing it without needing the lyrics scrolling in front of me.

“Sixty Second Interval” is a commentary on war and how armies have brief cease-fire periods so they can attend to the wounded. The melody on this one is simple yet very effective; its rhythm is like that of a ticking clock. I like how at the end you can hear the voice counting “56..57..58..59..”.

“Waiting for the Weekend” is another song about being in love, but this time it is about a couple who can only be together on the weekends. It has a nice catchy beat to it.

“Spring Collection” tells about a sixteen year old girl who dresses in the latest punk styles, and the young man who cannot stand how she does so just to fit in.

“Letter from Hiro” is a tale of two pen pals during World War II. It has a bit of a melancholy sound to the verses. I really like the guitar work on this one as well as the traditional Japanese tune incorporated at the end.

Side two starts with “News at Ten”, their third single which went to number 44 in the UK. The song takes a look at the generational gap between the young adults of the day and their parents. Too often neither side can or will see where the other is coming from.

“Somehow” has a bit of an anxious sound to it that parallels the lyrics. The chorus repeats the same phrase over and over - “don’t leave me”. Clearly this one is a plea to a love for forgiveness and another chance.

“Prisoners” too as a frantic pacing as the lyrics tell how we’re all prisoners in the routines of day to day life.

“Trains” is another song about obsessive love, waiting for the girl he desires at the train station.

The album closes with “Bunkers”. I like how they change up the rhythms a bit on this last song.

While I knew of the Vapors from their hit single, through the local college radio station and then later from their video for it on MTV, I really had not been exposed completely to their sound until a few years ago. An old friend clued me in to New Clear Days and I added the rest of the album to my musical library.

What I like about the music on this album is that the rhythms are very tight and straight-forward. The lyrics are a mix between political commentary and relationship woes, but they are done with a moody angst rather than an out-and-out rebellion of punk. If you’re looking for some less familiar new wave music from the 80’s, the Vapors are a group you might want to check out.
Posted by Martin Maenza at 5:26 AM