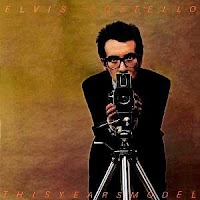 On March 17th of 1978, Elvis Costello released This Year’s Model, his second studio album. It was also the first he recorded with the Attractions (Steve Nieve on keyboards, Bruce Thomas on bass and Pete Thomas on drums), the start of a long working relationship together. It sold fairly well, going Gold in both the UK and the US. As far as chart positions, it also did respectable (number 4 in the UK, number 15 in Norway, number 10 in Sweden and number 30 in the US).

Side one starts with “No Action”, a song about putting the breaks on a relationship as it is very much a love-hate thing. For me, this one shares a lot of traits with punk - a short track under two minutes with a quick-tempo and an attitude - however I also find the song to be much more melodic than most punk offerings.

“This Year’s Girl”, a commentary on the latest “it” girl, has a steady beat and a funky guitar riff that makes it very danceable. Looking at the song with some hindsight, I can see foundations of the new wave sounds here that would become popular in the coming a year or so.

“The Beat” is a nice follow up track as it carries on the same. The rhythm here has a bit more of a swing to it which is a nice change-up.

After four rousing tracks, the band slows things down a bit with “Little Triggers”. The song has an old-fashioned 50’s feel to it musically, but the lyrics are full of venom when they criticize the lies the woman tells.

If the previous track stepped out of the 50‘s, “You Belong to Me” drops right out of the 60’s. It reminds me of the psychedelic and power-pop songs from the “summer of love” period. Together these show the wide influences to Elvis Costello’s song-writing.

“Hand in Hand” opens side two with feedback and some backward-masking before segueing into a slow building rocker.

“Lip Service” has an interesting hand-clap before the chorus and melody.

“Living in Paradise” has a catchy hook to it that I like.

“Lipstick Vogue” has a bit of a surf-rock beat to it, while Costello delivers rapid-fire lyrics with deft precision.

“Radio Radio” went to number 29 on the UK singles charts. Ironically, the song protests the commercialization of radio programming and the influence the record companies have on what songs are featured on the airwaves. Costello felt the BBC in particular was working hard to suppress the political message of punk rock music. I really like this track a lot, the smart way Costello spins the words in a very “intelligent rock” way, and will drum my hands to the beat on the steering wheel whenever this on comes on the satellite radio in my van.

The UK release had six tracks on side two. Instead of “Radio, Radio”, the following two tracks appeared. “(I Don’t Want to Go to) Chelsea” was released as a single and went to number 16 in the UK. I like the guitar riff on this song that comments on the siren lure of fads and fashions. “Night Rally” starts with a darker, dirge-like march.

When this record came out, I was still in junior high school and thus not yet into my import-alternative music phase. Luckily, my older brother was in high school and all about acts like Elvis Costello. Through his listening interests I came to know and appreciate the tracks on This Year’s Model and more.

As an adult, I can certainly appreciate the complexity and the layers to Elvis Costello’s songs. Yes, there is his unfiltered anger and his lack of trust. But there is also a wordsmith quality that I really appreciate, the way he can turn a phrase and use symbolism to get his thoughts across. His early work is amazing and very rightly deserves the critical praise it has earned.
Posted by Martin Maenza at 7:38 AM