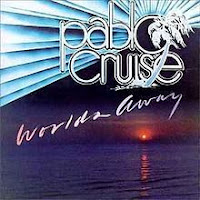 So this week I was chatting with my friend and up-and-coming comedian Michael O'Connell (click here to go to his blog and find links to his YouTube comedy clips) and he mentioned that tonight (September 17, 2011) that he would be opening for Pablo Cruise in Loomis, California (at the CCD Expo). As a fan of this pop/rock band from the 70's and 80's, I was sufficiently thrilled for Mike.

Pablo Cruise was formed in California back in 1973 when members of former bands Stoneground (Cory Lerios, David Jenkins, Steve Price) and It's A Beautiful Day (Bud Cockrell) came together. They put out their first two albums with some minor success. Then in 1977, they hit it big with a couple Billboard hits. The band went through some line up changes in the mid-80's before an initial break-up in 1986. A decade later, they reunited briefly; in 2004 they came back together once more. Today they continue to tour, mainly in and around California, with three quarters of the original line up (bassist Bud Cockrell passed away in 2010). You can find out more about the band's touring dates at their website (click here for that site).

Today I'll be reviewing Pablo Cruise's fourth studio album, 1978's Worlds Away. The record went to number 6 on the Billboard Hot 200 album charts. It was a platinum seller in the US, and it went gold in both Canada and Australia.

Side one opens with the title track "Worlds Away". The song has a wonderful synthesizer opening which comes back again to supplement the chorus. I love the piano on this one as well. It is definitely a nice way to open a record, with lots of energy.

"Love Will Find a Way" was the first single from the album; it reached number 6 on the US Billboard singles chart. I have fond memories of this one, hearing it on the radio (in the car, in my bedroom) or at places like the roller-skating rink. I find myself often singing along with the harmonies on the chorus. It is a nice contrast to the first song with a more stripped down sound to it and a bit more emphasis on the guitars.

The slower-tempo "Family Man" marries the piano and synthesizer lines again nicely. The lyrics have a positive message as they tell of a man who works hard to support his family.

"Runnin'" starts with a beautiful piano opening that builds in energy as the other instruments come in. Together, they create a great mood to go with the theme of the song. This is an amazing deep track and a solid way to close the first side.

The second side begins with the second single, "Don't Want To Live Without It", which went to number 21 on the Billboard charts. The bass guitar here is funky and the percussion is perfect for dancing. Since I was too young to hit discos at the time of the release, I just need to have faith that it was a popular tune in clubs.

"You're Out To Lose" is next with another nice groove that makes me want to get up and boogie. I like the drum and guitar solos on this one.

"Always Be Together" slows things down a bit with a gentle, sweeping melody. This love song is perfect for a slow dance with the one you love.

"Sailing to Paradise" brings to mind a tropical getaway with its swaying rhythms and cool vocals.

"I Go to Rio" is the final track and also the final single from the album; it went to number 46 on the Billboard charts. This cover of the number 1 in Australia 1976 Peter Allen hit has a nice salsa rhythm to it. Pablo Cruise has a good time with this one.

Worlds Away came out early in 1978 and, by the summer, their hit singles were all over the radio airwaves. This time corresponded to when I was still in Middle School (junior high school) between 7th and 8th grade. For my thirteen year old self who was into disco, Top 40 and soft rock music, Pablo Cruise was right up my alley. Their sound was the perfect compliment for hanging out at the pool everyday during that summer. Listening to this record today takes me back to those warm, sunny summer days of my adolescence.
Posted by Martin Maenza at 7:32 AM