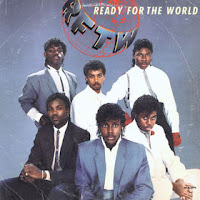 Founded by Melvin Riley (lead vocals, keyboardist) and Gordon Stozier (lead guitar), the R&B group Ready For the World came out of Flint, Michigan, in the middle of the 1980's. Their June 1985 self-titled debut Ready For the World did very well, reaching number 17 on the US Billboard Album chart (with a forty-eight week run) and number 3 on the US Billboard R&B charts. It achieved Platinum sales status. While they would release two more albums in the late 80's and one in the 90's, this debut was their best selling record to date thanks to a number of hit singles on the pop and R&B charts.

Being from Michigan, Ready For the World found a way to pick up that Minneapolis sound made popular by Prince, the Time, Alexander O'Neal and more, and merge it into their own compositions. There are many times listening to this album that some uninformed could confuse these songs for ones done by Prince as they share similar music elements and a penchant for sexually suggestive lyrics.


Side one begins with "Tonight", the first single ever released by the band. It fell short of the Billboard Hot 100 (topping out at 103) but went all the way to number 6 on the R&B charts. Originally pressed and shopped around to local stations by the band, it was this song which won them their record contract with MCA Records. It is an interesting choice to start out the record with a slow jam, certainly something not standard. Yet it does work. This song shows you that the band is all about that deep seduction, with straight forward lyrics and orgasmic ooo’s and aah’s.

The fourth single from the album was "Digital Display"; it went to number 21 on the US Billboard charts, number 4 on the R&B charts and number 3 on the Dance charts. The synthesizer sound and drum-machine are the stars here; they give the song its computerized tone. The lyrics contain a very thinly veiled symbolism to fondling a woman’s body parts. I can remember quite clearly dancing to this one out in the clubs as it has a great beat.

"Ceramic Girl" was the final single released from the album; it barely dented any of the charts and only reached number 82 on the R&B charts. It has a decent dance beat and some very strong guitar riffs. Perhaps the lack of a good lyrical hook was its downfall.

It is time to slow things down again with another suggestive, even paced jam. "Deep Inside Your Love", the second single from the album, also went to number 6 on the US R&B charts. The singer expresses his yearning to make love to his woman. I like the guitar solos on this one.

Side two starts off with the smash hit "Oh Sheila", the track that really propelled the album sales for the group. The song went to number 1 on the Billboard singles chart (knocking out Dire Strait‘s “Money for Nothing“ and then being dethroned a week later by a-ha‘s “Take on Me“), number 1 on the R&B and Dance charts, and number 50 on the UK singles charts. Now, this song was one of my go-to dance jams in late 1985; if I heard it out at the clubs I had to find someone to hit the dance floor with me. I still love the song to this day.

"Human Toy" keeps the beat going as it goes back to the same well as “Digital Display” did on side one. This time, though, the guy’s body is the thing with which to be played. You can’t say that Ready For the World wasn’t willing to write something for both genders to enjoy.

"Slide Over" was released as a single in 1986, but the band's popularity was already sliding on the charts. This slow groove only reached number 57 on the R&B charts. I actually like this one as it is probably the least suggestive (barely) of the ballad tracks. I recall it being played at the end of the night a few times during my partying days in 1986.

"Out of Town Lover" is another slower tempo track. The steady beat of the percussion mirrors the longing in the singer’s vocals.

The album closes a bit more up-beat with "I'm the One Who Loves You". Musically it incorporates the band’s signature drum line along with some kicking synthesizers and a powerful guitar solo.

Ready For the World hit the stores at the time I was in college, during the summer between my sophomore and junior years when I was working a job in Randolph, New Jersey. I picked this one up on cassette on a Friday after work at the nearby mall (something I did every week - buy music and hit a movie to celebrate the end of the work week) and listened to it quite a bit. When I returned to campus that November, I found out how popular the songs had become at the local dance clubs and at floor parties.

Twenty-six years later, I think it still serves as a good representation of the mid-80's R&B/dance music coming out of the US. The rhythms are solid and, though suggestive, the lyrics are pretty tame by today's standards.
Posted by Martin Maenza at 5:29 AM

Thanks for the memories. I remember a couple of these hits quite well. Good grooves. I always thought they were ripping off Prince a bit with their sound, especially with the rattling percussive snare sound. Listen to "Oh Sheila" and compare to "Let's go Crazy" and "1999". That distinctive side speaker snare sound.

10DD, I totally agree with you on your points. The percussion on these tracks does indeed call to mind music from Prince's 1999 and Purple Rain music. No surprise that I enjoyed that album since I love those two Prince masterpieces. Thanks for reading and for the comments.

I heard a story back when this song was new, that Sheila E. caught the last verse and chorus of this song on the radio, and called Prince and exclaimed.. "You wrote a song about me!?!" Yup.. I'd say they nailed the Minneapolis sound!!

There was definite speculation on whether the song was written about her or not. The RFTW guys said definitely not. Just a coincidence.