Eddie and the Cruisers (soundtrack) 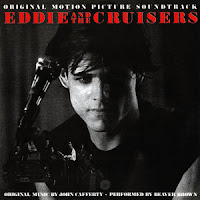 With the crisp autumn weather in the fall of 1983 came to theatres a film about a fictional 1960's rock 'n roll band called Eddie and the Cruisers. Based on a novel by P.F. Kluge, the film starred Tom Berenger, Michael Paré, Joe Pantoliano, Matthew Laurance and Ellen Barkin. While the film did not do very well at the box office and received quite a bit of mixed to negative reviews, the movie found new life on cable television. Thanks to music provided by John Cafferty and the Beaver Brown Band, the accompanying soundtrack album reached number 9 on the US Billboard album charts and sold over four million copies by the fall of 1984; two hit singles from the record also received a good bit of air play.


The first side kicks off with the hit song "On the Dark Side". The song went to number 7 on the Billboard Top 40 chart during its eleven week run and number 1 on the Billboard Mainstream Rock chart. I absolutely love this song! It is a five-star track in my iTunes and just that opening piano is enough to build my excitement. It packs a ton in two minutes and forty two seconds; this one is guaranteed to improve my mood every time I hear it for I have such fond memories of dancing to this one back in college.

The second single, which only reached number 31 after seven weeks on the Billboard Top 40, is next. "Tender Years" is a ballad with a beautiful saxophone opening. This was a big slow-dance track back in the day; one where you could croon along with John Cafferty on the chorus as you swayed across the floor.

"Runaround Sue" is a cover of the 1961 number 1 hit single by Dion. This version doesn’t stray too far from the original; it fits the period of the film well.

"Down on My Knees" is taken directly from the film (the scene where the Cruisers play a college mixer). The song sounds a bit more modern than a 1960’s track; this one definitely has that Springsteen sound to it too.

It then segues right into "Hang Up My Rock and Roll Shoes" which does have a nice late 1950’s sound to it (thanks to the diddling piano and the swinging saxophone).

Side two begins with "Wild Summer Nights", a nice up-tempo track. I remember hearing this one a lot at college parties; it was one of the non-hit tracks that seemed to catch on. I think the Springsteen similarities really were a factor. It also has a touch of the Beach Boys sound to it near the end.

"Boardwalk Angel" is a nice slow dance number that brings to mind a seaside summer night. The gentle sway of the guitars and the piano are perfect for that.

Kenny Vance, formerly of Jay and the Americans, worked with the film's producers on the musical production for the film. Vance takes the lead vocals, backed by the Beaver Brown Band, on the next two tracks.

"Betty Lou's Got a New Pair of Shoes" is a straight-on 1950’s sounding track with ooo-wahs and a girl’s name in the title. It sounds like it would be right at home playing at a sock-hop or coming out of a jukebox at the local diner.

"Those Oldies But Goodies (Remind Me of You)" also fits that 1950’s doo-wop style perfectly. It sounds like something Little Anthony and Imperials might have done.

The record closes with "Season in Hell (Fire Suite)", a moody and almost psychedelic piece that is there to represent the tortured musical soul of Eddie.

I did not catch Eddie and the Cruisers in the theatres on its initial run. Like many, I discovered the film on HBO - most likely while I was home on summer break in 1984, between my freshman and sophomore years of college. I recall though that I was a huge fan of the hit singles, especially since John Cafferty and his band had a sound that was very reminiscent of Bruce Springsteen and the E Street Band. The first two tracks at least are must-haves for your 80’s music library.
Posted by Martin Maenza at 7:59 AM

Email ThisBlogThis!Share to TwitterShare to FacebookShare to Pinterest
Labels: 80's, Eddie and the Cruisers, John Cafferty and the Beaver Brown Band, music, soundtracks