Any Trouble - Where Are All The Nice Girls 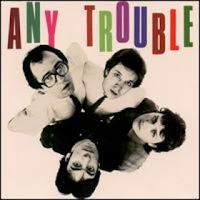 The British rock band Any Trouble was formed in Crewe, England, in the late 1970’s. The roster consisted of Clive Gregson on vocals, Chris Parks on guitar, Phil Barnes on bass and Mel Harley on drums.

In 1980, the band put out their debut album Where Are All the Nice Girls on the Stiff Records label. Any Trouble gained instant notoriety in the UK after a glowing article in Melody Maker magazine, but it was a double-edged sword as lead singer Gregson was unkindly compared to Elvis Costello. While there are a few similarities (guitar based pop songs with a pleasing male lead voice), that’s about as far as the comparison goes really. Gregson doesn’t have near the angst or attitude of early Costello. Most of the songs here are straight forward love songs.

For this review, I’ll be doing the original UK vinyl release. The US release had a couple extra tracks and a play different order.

Side one opens with the steady rhythms and bouncy drumbeats of “Second Choice”. As the lead single, it topped out at number 108 on the US Billboard Hot 200. The lyrics tell of a guy in love who has been given less of a priority in the relationship. The three part guitar harmony of Gregson, Parks and Barnes works very well. I like too the hand-claps during the verses.

“Playing Bogart” kicks up the tempo a bit more thanks to Mel Harley on drums. This one has a nice swing to it that makes it pop.

“Foolish Pride” is a nice tale of infatuation that comes with good advice of a friend.

To change it up a bit, “Nice Girls” opens with a single guitar and Gregson’s vocals. I like the stripped down approach it takes for the first minute or so before the rest of the band joining in.

“Turning Up the Heat”, the B-side of the lead single, turns up the beat too. The simple and repetitive chorus works well on this one.

Side two starts with “Romance”, my second favorite track on the album. It has a catchy rhythm to it.

“The Hurt” has a rapid-fire delivery, with the guitars and the drums keeping perfect synchronized time.

“Girls Are Always Right” has a gentler take thanks to an added piano accompaniment.

“Honolulu” is the locale of the fantasies a young man has about a certain young woman.

“(Get You Off) the Hook” is about making the tough decision to get out of relationship.

The US release included the two additional tracks. “No Idea” has a fast tempo about the complexities of love that gets my foot tapping. “Growing Up” is another faster tempo track which happens to cover a little Bruce Springsteen no less. This one has a number of nice solos midway through.

After this album, the band put out three more studio albums in the 80’s as well as a live album. In 2007 Any Trouble reformed to record a new album called Life in Reverse.

For me, I first heard of Any Trouble through the popular single “Second Choice”. The college radio station nearby would play it on occasion. In the 90’s, the song came back into my consciousness when I got the multi-disk Rhino music compilation set Just Can’t Get Enough: New Wave Hits of the 80’s. The song became an instant favorite out of the lesser known songs on the collection.

In 2008 when I was getting on board with emusic.com, the service was still working with mostly smaller labels. That is when I ran across Where Are All the Nice Girls. I quickly downloaded it and soon it became a favorite of mine when listening on my iPod.

If you like simple, straight-forward, guitar-centric pop music, Any Trouble might be a group you may want to check out. The songs sound as fresh today as they did back thirty one years ago.
Posted by Martin Maenza at 5:34 AM