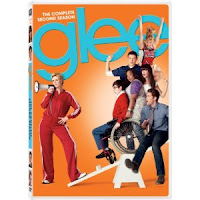 This week, the complete season 2 of Glee was released on DVD (also season 2 volume 2 for those folks, like me, who bought the first half of season 2 on DVD back in January). The six disks contain all twenty-two episodes from the season in widescreen format. The extras are plentiful with behind the scenes info and more. My favorite part is the Glee Music Jukebox feature that allows you to jump to the musical performances within each episode, for when you want to hear that favorite song.

For me, the sophomore season of Glee was a mixed bag. There were aspects I loved and aspects that just didn't work for me. I thought I would take a few paragraphs, broken down by topic, to hit what I consider some of those highlights and lowlights of the season.

New Characters: I absolute love the addition of Coach Shannon Bieste (played by Dot Marie Jones). She brings an amazing heart to the show and just enough quirkiness with her down-home phrases. Clearly the best new part of the season. Also I really like how well Blaine (Darren Criss) fit into the show; his performances with the Warblers were outstanding and he plays well opposite of Kurt (Chris Cofler). On the flip side, I never completely warmed up to Sam (Chord Overstreet). I liked him okay in the first few episodes but he never was able to really shine for me. I think the writers had a hard time figuring out how to make him fit.

Expanded Roles: I was very pleased to see more focus on a number of existing characters from season 1. Heather Morris who plays Brittany is very funny and a fierce dancer. Naya Rivera who plays Santana also has great comedy and drama chops, plus she's a great singer too. Harry Shum who plays Mike Chang got a chance to show his wonderful dancing skills too. I'm a fan of all three of these characters. Max Adler got a lot of screen time as Dave Karofsky; his work on those bullying-closeted storylines was solid. Ashley Fink brought some nice snark with the expanded role of Lauren Zizes as a member of New Directions and a boyfriend for Puck (Mark Salling).

Guest Stars: Gwyneth Paltrow appeared in a few episodes as substitute teacher Holly Holliday. I definitely have a love-hate relationship here. Loved the character, loved her energy on the musical numbers, hated that her character completely dominated the plot lines in every episode she appeared in. I would like to see her back once for season 3 though. John Stamos wasn't given enough to do with his character of dentist Carl, boyfriend and then husband to Emma Pillsbury (Jayma Mays). I think there was a lot more that could have been explored there but the season didn't have enough time. A shame. Charice showed up for a few episodes as Sunshine. I thought her voice was amazing and was disappointed we didn't see her more on the show. Kristen Chenoweth returned in the role of April Rhodes late in the season; I think she was much underused. Jonathan Groff returned as well as Jesse St. James - I actually found his appearances to be pretty funny in a dark, sarcastic way. Carol Burnett's appearance as Sue's (Jane Lynch) mother was a bit of a disappointment (I'm a long time fan of Burnett from her classic variety show in the 70's).

Theme Episodes: some of them worked for me and some didn't. I enjoyed "Britney/Brittany" with its tribute to the music of Britney Spears; Heather Morris really shined in this one. "The Rocky Horror Glee Show" however was a bit of disappointment (I guess I am too much of a fan of the original film to see anyone else pull these songs off). "A Very Glee Christmas" was pretty good with the best part being Coach Bieste's talk with Brittany. I'm on the fence for "Rumors", the Fleetwood Mac tribute - loved the songs, disliked most of the plot lines.

Other Plots: I appreciate that the writers took extra time on the whole bullying plotline, even if it did send Kurt off to Dalton Academy for awhile. I also liked how we got some focus on typical high school things - homecoming football game, school assemblies, and the prom. This is a show about high school so seeing them in classes (other than Glee club) and interacting with other students and teachers is a key. More for season 3 please. Finally, I'd be remiss if I failed to mention the relationship between Sue and her sister Jean and how that story plays out (those scenes always remind us that Sue is more than an outlandish, comic-book villain - she has a human side that even she can't keep buried all the time).

Songs: what would any discussion of Glee be without talking about the music? The performance numbers are the thing that makes this show different and fun. Granted, it did feel like at times that plots were there only to string five or six songs into one hour. My hope is that they can balance things a bit more with season 3. also, this season tended to focus on a lot of current hits which was okay (I discovered a few new artists I now like thanks to the show) but I want to see a better mix next season. I did have a few standout songs from season 2 which I loved. In no particular order:

"Papa Can You Hear Me?" - Lea Michelle as Rachel does Barbra Streisand superbly.

"River Deep, Mountain High" - Amber Reilly as Mercedes and Naya Rivera knocked this one out of the park! I discovered the amazing version by Katrina and the Waves after hearing this one.

"Forget You" - Gwyneth did a fantastic job on this Cee Lo Green tune.

"Do You Wanna Touch Me (Oh Yeah)" - another great job by Gwyneth on this Gary Glitter/Joan Jett classic.

"Don't You Want Me" - a fantastic version of the Human League's hit by Lea and Darren.

Season 3 of Glee starts this Tuesday night (9/20/11). From what I hear, we'll have less tribute episodes and guest stars, and more focus on storylines and character development. Oh, and we'll see the winners of the Glee Project being weaved into those stories too. I'm looking forward to a season that gets back to basics of high school drama and more great musical performances.
Posted by Martin Maenza at 7:36 AM

I enjoyed a few of the eps. Gotta agree that Bieste was a great addition, esp in the ep with everyone getting drunk.

I was a big fan of GP's appearances -- I thought she was sexy and fun. Mr. Schu, OTOH, was pretty bad most of the season.

I am looking forward to Shelby's return next season. I heard Idina will be in about half the season.

Derrick, thanks for reading and for the comment. I agree - Mr. Schuster did take a big backseat this season. I am very excited for Idina to return as Shelby. There is a lot to explore with her and Rachel, her and Quinn, etc.