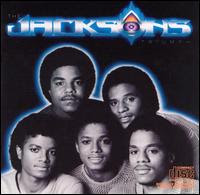 On September 26th of 1980, the five brothers Jackson (Jackie, Tito, Marlon, Randy and Michael) released their thirteenth studio album Triumph. The record made it into the top ten on the Billboard Album chart (at number 10) and number 1 on the US R&B album charts; in the UK it went to number 13. World-wide it sold 1.9 million copies and generated five singles.


“Can You Feel It” opens the first side. The sweeping song, with a video that featured the brothers towering over the world spreading positive vibes, was the third single from the record. It went to number 77 on the Billboard charts and number 30 on the R&B charts in the US, and number 6 in the UK. I love how this one opens in a grand way and just continues to build. The beat is a good one to dance too - a nice six minute workout to get that blood pumping.

The first single from the album was “Lovely One” which went to number 12 on the Billboard charts, number 2 on the R&B charts and number 29 in the UK. It continues the dance party with a song that would have been right at home on Michael’s previous solo release Off the Wall. This one is definitely my favorite track from the album.

“Your Ways” shifts the tempo slightly but still keeps the boogie on board. It has a bit of an ethereal sound to it with the backing sounds.

After the first three tracks, “Everybody” doesn't want to rock the boat. It helps close out the side with more of the same, thus making first side of Triumph one that could have been put on the turntable and played straight through for twenty minutes of your weekend party.

The second side checks in at the “Heartbreak Hotel” (renamed later “This Place Hotel” to avoid confusion with the famed Elvis Presley song - though the songs are completely different). This second single went to number 22 on the Billboard charts and number 2 on the R&B charts. The song, with its tales of love tragedies, has a nice funky sound to it at the beginning and soft piano part at the end.

“Time Waits for No One”, the fifth and final single, failed to impact any of the charts across the globe. This slower ballad is pleasant enough but the only thing that makes it standout is that it is that it is the slowest rhythm on the record.

“Walk Right Now”, the fourth single, only reached number 73 on the US charts but did very well in the UK where it peaked at number 7. The song tells the tale of a couple where the woman continues to be unfaithful to her man and it does so with, what else, a great dance beat.

“Give It Up” slows the tempo to a mid-range; it is not quite a true slow-dance candidate. Call it one of those songs where you can catch your breath but still move about the floor.

“Wondering Who” closes out the album. The thing that jumps out for me on this one is that Michael does not do the lead vocal duties, which is a nice change of pace. I know it made sense to feature him on a number of tracks, to cash in on his solo success, but the Jacksons were very much a group effort and had been for over a decade at this point.

With Triumph, the Jacksons were clearly trying to show that disco was not completely dead as the 80’s were beginning. And as a disco fan I was happy to hear these sounds back in the day. I can see the songs here as the start of a transition of the R&B dance sounds of the 70’s into something a bit different for a new decade. With the rise of the punk, new wave and synth sounds, the dance floors were clearly open for a variety of music. For me, as long as long as it had something I could groove to I was pretty happy.

So, if you’re looking for something from the old school dance archives on this “funky Friday” to treat that boogie fever, Triumph by the Jacksons might just be what the doctor ordered.
Posted by Martin Maenza at 5:26 AM