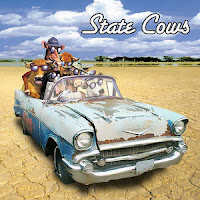 The end of last week I got an unexpected email from one Daniel Andersson. Turns out he is the lead singer and guitarist for a group he formed with Stefan Olofsson (keyboards and bass) in Umea, Sweden. For awhile they were the foundation of a short-lived Steely Dan tribute band called “2nd Arrangement”. Eventually, though, they began to play their own music under the name State Cows. In 2010, they released their self-titled debut album with the help of a number of guest musicians.

I gave one of their tunes a listen and was an instant fan. I knew I had to hear the rest of their album as soon as possible.


“I‘ve Changed” opens with a nice urban feel with the sound of a passing police car and then a moving beat thanks to the combined drums and keyboards. It gets the album off to a nice rousing start.

“New York Town” is next. This one is an ode to the Big Apple, and readers here know how much of a fan I am of songs about New York City. I always dreamed of living there as a teen. This song nicely captures a positive vibe of the city in both music and lyrics. Jay Graydon provides the guitar solo on this one.

“Come to the Point” keeps that cool jazz rock vibe going as a man faces a turning point in his life. Peter Holmqvist is the guitar soloist on this track.

“Stella by the Barlight”, a song about a guy who isn’t having the best of days, features a smooth horn section. The guitar soloist on this one is Mikael Sandstrom.

“Mystery Jane”, an ode to an intriguing young woman, has strong piano lines to carry the number forward.

“Painting a Picture” has a funky groove. The lyrics tell of an artist who is looking to express his inner dreams.

“Tunisian Nights” paints a picture of an exotic locale, complete with camels and harem girls.

“Looney Gunman” ends with the most amazing lyric: “now I realize that you were too yellow to stay, but you know only half of green is blue”. I find that phrase so cool. I also really like the saxophone solo by Petri Kivimaki.

“Riding This Highway” slows things down a bit. The tempo is perfect for the song; it has that early morning feel to it as the guy in the song slips out of town on a road to who knows where.

“No Man’s Land” is a short instrumental track. The music has a mysterious aura to it, like fog wafting through a barren countryside.

“Lost in a Mind Game” closes out the album. I like the extra long opening on this the longest track of the group. Goran Turborn provides the guitar solo here.

What I find so amazing is that State Cows’ sound is so perfectly a late 70’s/early 80’s groove. If you played this CD for someone and didn’t tell them what they were listening to, I am sure they would never have guessed it was from 2010. It certainly sounds nothing like what I hear on radio today, and that is a major compliment in my book! Daniel and Stefan know how to compose songs with many layers of orchestration, infectious rhythms and beautiful harmonies.

If you’re a fan of greats like Chicago, the Doobie Brothers and, of course, Steely Dan, then you owe it to yourself to check out State Cows. Believe me; you will be happy you did.

The band can be found various places on the Internet. There is their official homepage at http://www.statecows.com. They are also on Facebook and MySpace under statecows and on Twitter @statecows. Finally, if you search on YouTube you can hear some of these tracks yourself.
Posted by Martin Maenza at 5:22 AM